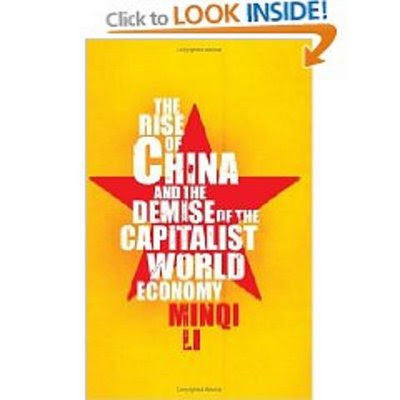 This book will be a basic text for the 21st Century for contemporary Marxist Leninists better known has Maoists. It is a rare example in the 21st century of Marxist Leninist Maoist Scientific Political Economy.

Minqi Li's scientificity refutes the caricature of Maoism prevalent in the bourgeois media principally in political economy but also in history - this a must buy and must read book.

Minqi Li who made his way from Free Market Friedmanite Economics in China via prison to Marxism Leninsm Maoism over the last decades has a unique perspective.

The personal transition of Minqi Li has led him to better understand both global capitalist dynamics and the necessity of Socialism in the 21st century has a solution to the multiplicity of problems old and new that global capitalism has spawned as well has writing an immanent critique of capitalist political economy..

It is worth buying the book for this chapter alone which shows that the older generation in China and participants in the Great Leap Forward have transmitted the truth about Mao to the new generation in China and the new Chinese working class has not lost its history but is retrieving it has their stuggle intensifies against the bourgeois power of the Princelings in the Chinese Communist Party.

The book makes a detailed examination of the Ecological Problems of Global Capitalism and shows that capitalism is not a sustainable economic system and for those that like those things Minqi Li even provides a mathematical proof.

The book has the following chapters

1. An introduction to China and the Capitalist World Economy

3. China and the Neoliberal Global Economy

4. Can the Capitalist World Economy - Survive the Rise of China ?

6. The End of the Endless Accumulation

The book constructively integrates the World System Theories of Immanuel Wallerstein with a new re-invigorated Marxism Leninism Maoism examining the world system through the ideas of core - semi periphery - and periphery and how hegemonic capitalist powers rise and fall from Venice via Holland to England and USA. Hegemons are always transient in the capitalist global system.

In the chapter on "China and the Neoliberal Global Economy" he investigates China's role in global commodity chains and there is an example of a commodity chain from Andy Xie Morgan Stanley's chief economist for Asia who estimated that for each US dollar that China exported to the US businesses in Hong Kong or Taiwan took 20 cents, and the US brand owners and distributors recieved the bulk of the benefits as the product sold for US$ 4-5 in the US.

This unequal exchange between China and the core states like USA and Europe provides a massive transfer of surplus value from China which helps raise profit rates in USA and Europe.

The rise of China from perihery state to a semi periphery state is highly problematic for the Global Capitalist System and Minqi Li examines in detail the contradictions and destabilisation of capitalism as a system that China's rise has created hence the title of his book "The Rise of China and the Demise of the Capitalist World Economy".

Needless to say his case will re-invigorate that struggle - so make sure this book is made widely available and read by all comrades.