Bob Buckle of APEC talks up Chinese and Indian Economies 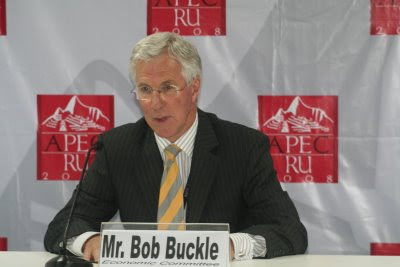 LIMA, Nov. 18 (Xinhua) -- A steady and robust economic growth of China and India is vital to help the world economy tide over the ongoing financial crisis, Bob Buckle, chairman of the Economic Committee of the APEC Secretariat, said Tuesday.

China and India have been "a crucial engine of growth" for the world economy, and a continued strong economic growth in the two countries would be vital to help restore market confidence during the global financial meltdown, Buckle told reporters during the APEC Leaders' Week that began in the Peruvian capital Lima on Sunday.

In the past decade, China has maintained a strong economic growth while steadily integrating into the regional and global economy, and economies in the Asia-Pacific region have benefited greatly from China's economic growth, he noted.

Unlike the Great Depression in the 1930s, the current financial crisis would not lead to similar dire consequences thanks to robust growth and enormous economic potential in emerging economies like China and India, Buckle said.

Still, these economies would have to reform their economic policies to be more resilient to market shocks, he said.

The APEC forum provides a great opportunity for the member economies to share experience in addressing such grave challenges as a sharp drop in global demand and investment, he said.

Buckle said the financial crisis has threatened to affect the real economy due to a sharp fall in global demand and foreign investment. Therefore, measures taken by governments should aim to minimize the fall in domestic demand, he said.

Earlier this month, the Chinese government announced a 586-billion-U.S.-dollar stimulus package amid rising concern about a sharp slowdown in the world's fourth-largest economy, a move cheered both at home and abroad.

China's gross domestic product ended its two-digit growth in the third quarter, rising by 9 percent, down from 10.1 percent in the second quarter and 10.6 percent in the first quarter, according to official figures.

Buckle also highlighted the importance of sound financial regulations and effective competition policies in improving economic performance in the region.

The Economic Committee of the APEC Secretariat will release its annual economic policy report on Thursday ahead of the APEC summit that begins Saturday, which will mainly explain the importance of competition policies as part of APEC structural reforms based on diverse economic, institutional and legal conditions of each economy.