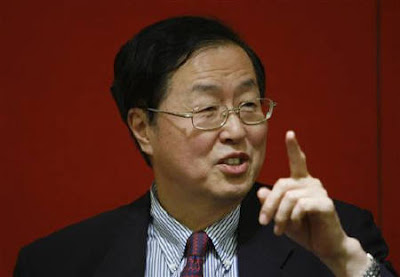 According to Mr Zhou Xiaochuan governor of China's central bank, China's economy was on sound track but prospects were complicated by the world economic slowdown.Mr Zhou said during the fifth session of the Standing Committee of the 11th National People's Congress, the country's economy was developing as expected, but the world economic slowdown added uncertainties to its prospect.

He said that our economy is highly reliant on overseas demand. Slacking exports resulted from the global economic slowdown would have a negative impact on the economy.He suggested the country need to be cautious in adjusting policies because there are both possibilities of cost-driven price rises and possibilities of continuous price falls in the future.

He added that "Currently, inflation pressure mainly comes from rising cost."He said in the world, more and more economies began to shift their policies from curbing inflation to boosting economic developments amid a world economic recession. The international commodity price is expected to enter a new round of rise.Mr Zhou said the PBOC will adopt flexible and prudent macro-control policies to strive for the stability of the country's financial sectors and promote sound and rapid economic growth.

He said that efforts would go to other specific fields, including establishing financial risk monitoring mechanism, enhancing cooperation among domestic and overseas financial organs, and ensuring liquidity in the banking system.He also urged strengthening foreign exchange management through enhancing cross-border capital flow management and supervision, in a bid to avoid losses and risk caused by speculation activities.

He added that the central bank would keep a close look over the real estate sector and improve financial services in this sector.Mr Zhou said that the impact of the world financial crisis on China's economy cannot be underestimated. However, the country's economic situation is sound as a whole, and is capable to effectively resist the external impact.

He said that China's financial sectors have grown stronger after years of development. The profit-earning and risk-resistance abilities have been greatly improved, market liquidity is sufficient, and the financial system is sound and safe.

Political Economy Research China Spotlights Chinese Steel Industry - is this just a blip or an indicator of something more serious like a slowdown in the Chinese Economy ?

Recession in Steel Industry - Closures of 50% steel mills in Tangshan

According to a survey by local industry analysts, collapsing global steel markets have caused the closure of half of the steel making capacity in Tangshan. Empty trucks line the roadside and most shops have closed their doors.

The closures have led to severe job losses and raise more questions about the health of the Chinese economy.Ms Yao Guoying analyst with Steel Bus, a Tangshan industry information service, said that "More than 50% of blast furnace capacity in the Tangshan area is idle and there are no signs of any improvement.

Very few are preparing to re start, and those that are very small."Steel Bus survey shows steel mills with large blast furnaces remain in operation, but at least 24 other mills have shut most or all of their capacity.

Tangshan Steel's 3 million tonne ship plate factory near the port of Caofeidian was said to be operating at close to capacity, thanks to continuing orders from shipbuilders in South Korea.

Analysts are struggling to understand the panic selling that has swept through Chinese steel mills and traders and caused average steel prices to fall about 40% since July.

According to Luo Bingsheng, the global financial crisis has hit the industry. The most direct influence is the drastic decrease of overseas orders. Steel firms have reported about a 50% drop in overseas orders for the fourth quarter. China’s steel exports have dropped 2.14% year-on-year during the first nine months, and steel billet exports have plummeted 81.07%.


The slowdown of the domestic economy has also affected the steel industry, as it curbs demand. Baosteel chairman Xu Lejiang said orders from the automobile and home appliance industries were declining, though those from petroleum, ship building, and construction machinery have seen no large change as yet. He said he didn’t know how long this situation would last.


In response, Chinese steel makers, big or small, have tried to lower losses by reducing production. Earlier this month, Shangdong Iron and Steel, Heibei Iron and Steel, Shougang, and Anyang Iron and Steel all announced reductions of 20% from October. The production of the four companies accounts for 16% of China’s total.

Officially, housing prices in China have barely ticked downward nationwide. Anecdotally, however, prices are plummeting in many cities, and year-on-year sales volumes have fallen as much as 60 percent from their peaks in some markets. The crash—a word that's gaining currency among analysts who follow China's real-estate sector—bodes ill for the broader economy at a time when Beijing hopes to ramp up domestic demand.

That's because, much as in America, housing in China sets the tone for the economy. It drives industrial outputs like steel, and largely determines final consumption of appliances, furniture and cars. "Everything moves hand in hand," says Scott Laprise, an analyst for CLSA based in Shanghai. "First people buy the home, then they fill it, then they get a car for the garage."

Two crucial sectors already slowing are autos and steel. Laprise calculates that steel rebar and girders for the construction industry compose about 65 percent of China's annual steel output, with much of the rest going to make autos, appliances or electronics. Even factoring in post-earthquake reconstruction in Sichuan and massive new infrastructure initiatives believed to be on the government's drawing board in Beijing, he forecasts that growth in steel consumption and auto sales will descend into the single digits next year, down from double digits this year, even if China's GDP stays above the critical 8 percent growth threshold for a soft landing—a feat by no means guaranteed.

New bankruptcies, higher unemployment and more pressure on profit margins seem unavoidable. Consider as an example FerroChina, an average-size steelmaker. Like most companies in China, it was thriving until very recently. In August it reported that net profits for the second quarter had tripled from a year earlier to $35 million. Then on Oct. 9, it shocked investors by announcing that "due to the current crisis" it was unable to pay $104 million in loans and was seeking outside capital to survive.

As a supplier of steel sheets to building contractors, it looked like a sudden victim of the housing slump—and perhaps not the last. "This could be a sign of things to happen," says Kan Shik Lum, head of Equity Capital Markets for Singaporean banking giant DBS. "For others who are subject to similar strains, the cracks may emerge."

China's export sector faces obvious headwind in a global economy lurching toward recession. At home, however, consumption is what matters most. Last week the China Association for Automotive Manufacturers revealed that car sales declined for a second straight month in September, compared with a jump of 17 percent in the first half of the year and 23 percent in 2007. Durable-goods sales, too, are weakening. Consensus forecasts now see GDP growth slowing from more than 10 percent to a pace closer to 8 percent.

Which puts China in a familiar trap. Its slowdown looks set to continue until the housing market finds a bottom.

The good news: unlike the United States, where millions of families are saddled with more home than they can afford, demand for better housing remains strong across China even if buyers are now on the sideline awaiting better deals. At issue is how long the market correction might take and what lower home prices would mean for the hundreds of steel-sheet, appliance and car manufacturers with products tethered to the housing market.

Laprise says the correction could be brutal, and he cites the example of cars. "In terms of the world market, 7 percent growth isn't bad at all," he says, "but the Chinese auto industry is geared for 30 percent growth, [so] the slowdown is a massive problem." Of the hundred or so car companies currently in production in China, he expects as many as 85 will disappear by 2015. There's only one way to describe that: a pileup.