China - the current situation is grim 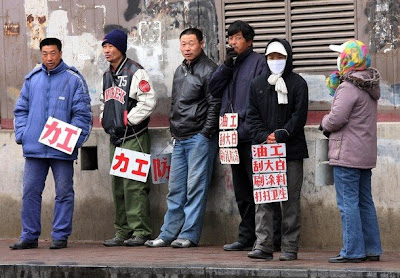 Since October, our country's employment situation has been affected along with changes in international economic conditions," Human Resources and Social Security Minister Yin Weimin said.

"The current situation is grim, and the impact is still unfolding," Yin said.

The global financial meltdown has dealt a body blow to China's vital export industries that account for 40 percent of the economy, causing thousands of factories making toys, shoes and cheap electronics to fold. Millions of laid-off migrant workers have flocked back to their rural homes and local governments nationwide have found themselves deprived of key sources of tax revenue.

China's economic growth fell to 9 percent in the latest quarter after expanding 11.9 percent last year, and economists warn of further declines in the new year.

Political Economy Research says the offical figure of 4% unemployed in China is a serious underestimate of the unemplomnent situation has it only includes urban residents with ID in the towns and cities and not the 150 million migrant workers who do not appear in the unemployment statistics
Posted by nickglais at 1:32 AM