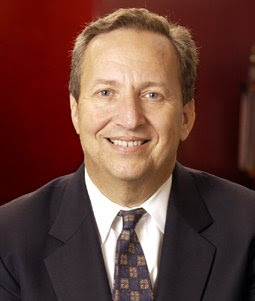 That is where Larry Summers comes in because he was the last treasury secretary under Clinton. He along with Alan Greenspan and Robert Rubin were the key architects of the policies of deregulation that created the crisis that we’re living now. And those key policies are the killing of Glass-Spiegel that allowed a series of very large but mergers that created these institutions that are too big and too intermingled to fail we’re told again and again.

The deliberate decision to keep the derivatives out of the reach of financial regulators- that was also a Summer’s decision. And also allowing the banks to carry these extraordinary levels of debt. 33 to 1 in the case of Bear Sterns.

Now, in my book the Shock Doctrine I started chapter with a quote from Larry Summers in the context in which he says it was 1992 and it was when he was making World Bank economic policy as it related to Russia, in the midst of a financial crisis. What he said and this is why I quoted him because it really shows the extent to which he is truly an ideologue and a follower of the very ideology- not just a follower but a propagator of the very ideology that Obama ran his campaign against. And here’s the qoute.

This is Larry Summers in 1992: “Spread the truth. The laws of economics are like the loss of engineering. One set of laws works everywhere.” And then he laid out those laws a little bit later.

He referred to the three “ations”, and those were privatization, stabilization, and liberalization. So he has been preaching the doctrine. He is by no means an innocent bystander. He is a dyed-in-the-wool privatizer, free trader. And he along with Tim Geithner, his deputy play key roles during the economic crises.—along with Timothy Geithner.

They preached more deregulation, more privatization and economic austerity to disastrous results. I think this is really troubling. One thing that Obama said is that Larry Summers set the terms of the debate for this financial crisis and that once again is very worrying. Because if Barack Obama thinks that these are the only terms, the parameters of the debate, then there’s very very narrow…