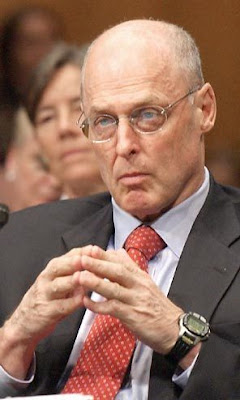 Nov. 12 (Bloomberg) -- U.S. Secretary Henry Paulson plans to use the second half of the $700 billion financial rescue program to help relieve pressures on consumer credit, scrapping an effort to buy devalued mortgage assets.

``Illiquidity in this sector is raising the cost and reducing the availability of car loans, student loans and credit cards'' Paulson said today in a speech at the Treasury in Washington . ``This is creating a heavy burden on the American people and reducing the number of jobs in our economy.''

Treasury and Federal Reserve officials are exploring a new ``facility'' to bolster the market for securities backed by assets, Paulson said. Officials are considering using a portion of the bailout money to ``encourage private investors to come back to this troubled market,'' he said.

The Treasury chief said the department is also considering having companies that accept new taxpayer funding get matching private capital.

Buying ``illiquid'' mortgage-related assets -- the reason the Troubled Asset Relief Program was established a month ago -- is no longer being considered, he said.

``Our assessment at this time is that this is not the most effective way to use TARP funds, but we will continue to examine whether targeted forms of asset purchase can play a useful role,'' he said.

Paulson has committed all but $60 billion of the initial $350 billion allocated by Congress to take equity stakes in banks and in insurer American International Group Inc. Lawmakers, who could reject Treasury requests for the remaining $350 billion, are pushing for aid to automakers including General Motors Corp. Paulson is resisting.

With less than three months left in the Bush administration, demands for assistance from foundering companies will likely escalate. The Treasury two days ago took a $40 billion stake in AIG. American Express Co. this week converted into a bank-holding company, making it eligible for funds.

Democrat Barack Obama assumes the U.S. presidency on Jan. 20. Obama last week said his economic team will ``review the implementation' ' of the rescue plan, suggesting he may have different priorities for its use.

In his remarks today, Paulson said that the Bush administration ``has taken the necessary steps to prevent a broad systemic event.''

Still, the secretary said that conditions remain ``fragile'' and that the stability of the financial system continues to be his highest priority.

Paulson also said that the Treasury will continue to look for strategies to help homeowners avoid foreclosure.

Political Economy Research says now that Paulson has given his Wall Street Banking friends money - they have just run with it and it has solved no problems.

Now they are coming futher down the money chain to consumer credit - any guesses who will benefit here ?

The economic rational approach would have been a rescue of mortgage debtors, or bottom up approach, but Paulson is has blind has Andrew Mellon was in the 1930's with just a variant on the same old free market anti labour ideology.

The bulk of credit created in a capitalist economy is created by private banks who have made a credit creation bubble in the battle for increased banking profits.

There used to be some supervison of this credit creation in the past, but that went with de-regulation, and we will now have to live with the consequences of deflating this credit bubble for a long time to come.