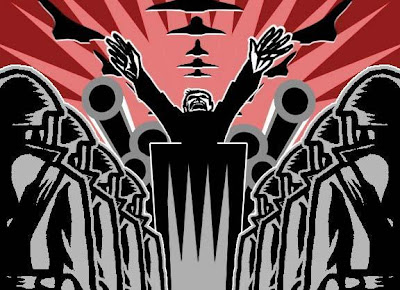 A Council on Foreign Relations member and former policy planner under prominent Bilderberger Henry Kissinger has penned a piece in the Financial Times of London calling for a "new global monetary authority" that would have the power to monitor all national financial authorities and all large global financial companies.

"Even if the US’s massive financial rescue operation succeeds, it should be followed by something even more far-reaching – the establishment of a Global Monetary Authority to oversee markets that have become borderless." writes Jeffrey Garten also a former managing director of Lehman Brothers.

Garten, now a professor of business at Yale, served on the policy planning staff of Kissinger during his time as Secretary of State. He also served on the White House Council on International Economic Policy under the Nixon administration and went on to become the Undersecretary of Commerce for International Trade under Bill Clinton. Citing "globalization", a "clash of philosophies" and the "vacuum at the centre" of the current global institutional apparatus, Garten describes his vision for a new monolithic world authority to oversee all financial activity around the globe.

Here are some of the highlights (emphasis added):

A GMA (global monetary authority) would be a reinsurer or discounter for certain obligations held by central banks. It would scrutinise the regulatory activities of national authorities with more teeth than the IMF has and oversee the implementation of a limited number of global regulations. It would monitor global risks and establish an effective early warning system with more clout to sound alarms than the BIS has.

It would act as “bankruptcy court” for financial reorganisations of global companies above a certain size. The biggest global financial companies would have to register with the GMA and be subject to its monitoring, or be blacklisted. That includes commercial companies and banks, but also sovereign wealth funds, gigantic hedge funds and private equity firms.

The GMA’s board would have to include central bankers not just from the US, UK, the eurozone and Japan, but also China, Saudi Arabia and Brazil. It would be financed by mandatory contributions from every capable country and from insurance-type premiums from global financial companies – publicly listed, government owned, and privately held alike.

In a conclusion that smacks of problem, reaction, solution Garten adds "In terms of US and international politics, a Global Monetary Authority is probably an idea whose time has not yet come. That may change as today’s crisis evolves."

What he describes is nothing less than a global financial dictatorship, operating across borders and forcing nations and corporations to register and adhere to strict monitoring and obey the same regulations. The implementation of such a system would represent total interventionism and the absolute final nail in the coffin of the free market.

Garten's call for a GMA echoes a piece published in the FT back in June by Timothy Geithner, president of the Federal Reserve Bank of New York.

Fresh from attending the Bilderberg conference in Chantilly, Virginia, Geithner called for a globalized banking system with "appropriate requirements for capital and liquidity".
Source: Info Wars
Posted by nickglais at 11:58 AM