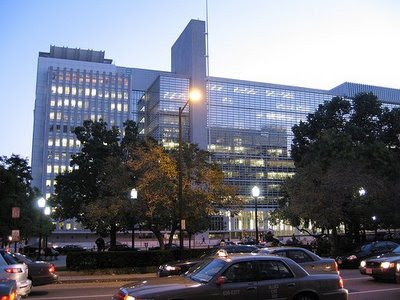 BF: Both these organizations have played a destructive role in Third World countries, haven’t they?

MH: Yes, and also in Russia and the post-Soviet countries where they promoted kleptocracies and an anti-labor, anti-development “flat tax” while freeing real estate and finance from taxation.

If you want to see the ideal of the World Bank and IMF, look at the Russian, Latvian, and Estonian economies. They have shrunk as if there’s a war on. It is a war – a neoliberal class war being waged by American finance against the rest of world. The effect is to “free” land rent and monopoly rent from privatized public enterprises to be paid to banks as interest, forcing taxes to be levied on labor and industry. So the government budget is limited to what it can extract from labor.

The World Bank applauds this and puts Latvia and the Baltic states at the top of its list of business-friendly countries. These happen to be the countries whose economies are now falling apart the fastest. These are the most neoliberalized economies in the world, causing them to suffer from depopulation, de-industrialization, poverty, deteriorating health standards and rising industrial accident rates.

They anti-labor policy and trade dependency are so extreme that about a sixth of men between the ages of 25 and 35 have told pollsters that they expect to emigrate in the next five years. In the past two years nearly 10 percent of Latvia’s workforce has emigrated – between 50,000 and 100,000 workers, about half to Ireland.

Many post-Soviet countries are going to go the way of Iceland as their real estate debt collapses.

IMF and World Bank advice has led the Baltics to borrow primarily in foreign currency against their real estate. Over three-quarters of Latvian mortgage debt is denominated in foreign currencies. Once the domestic currency goes down, debt defaults will spread and the economy will fracture.