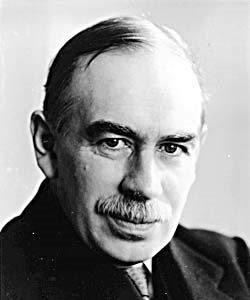 A: Keynesianism is basically concerned with measures to stimulate production and employment, to head off, get out of, or lessen the severity of economic slumps. That’s not what has been taking place thus far, in part perhaps because the slump is not yet very long or severe. The recent interventions are instead intended to restore “confidence” and get credit flowing, in order to prevent economic collapse. The goal is very different and the measures being taken are, accordingly, very different.

There’s an ideological return to Keynesianism, there has been for some time, among some on the left. They’ve given up on the possibility of socialism, so they desperately cling to the quasi-Keynesian notion of a “rising tide that lifts all boats” as something that can make people’s lives better within capitalism. I think the historical record speaks clearly here. Welfare-state capitalism failed miserably. Its supposed gains were unsustainable once the postwar boom ended. The failure of Keynesian policies to deal with the simultaneous inflation and stagnation of the 1970s-stagflation-basically put an end to Keynesianism as theory, except among ideologues desperate for a progressive alternative to socialism. The quasi-Keynesian notion that, by raising wages, governments can stimulate spending and create such prosperity that even the capitalists will be pleased with the results-rather than triggering a flight of capital to the Third World and other low-wage regions-has been disproved in practice. It’s also far-fetched theoretically. Capitalists make more profit when they pay lower wages, not when they pay higher wages. To the extent that Keynesian policies were ever able to work at all, if they did indeed ever work, it is because, as Keynes himself recognized, we had “closed economies” shielded from international competition and international financial markets. But we live in different times.

In any case, Keynesianism was meant to deal with economic slumps, to get out of them and to avoid them. Keynesian “pump-priming” was never intended as, and it cannot successfully be used as, a way of stimulating economic growth in the long run. The pump is primed with borrowed funds. But in the long-run, borrowed funds must be repaid.

Q. One response of the left to the greater state intervention has been to call for more, fuller nationalisation; do you think this an adequate response to the crisis?

A: No. I don’t see how or why it matters who holds the titles to property. If the issue is regulation, I don’t think that capitalism can successfully be regulated in the long run, as I said earlier. And events like the savings and loan crisis, the failure of Keynesianism to deal with stagflation, and the failure of welfare-state capitalism everywhere certainly don’t suggest that regulated capitalism is more successful than deregulated capitalism. If the issue is planning, I don’t think a capitalist economy can really be planned. The economy of the ex-USSR was certainly no success. The law of value asserts itself, it calls the shots, and policymakers adapt to it. To call that “planning” is a rather nice euphemism.

First published in the Commune

Political Economy Research is from a different Marxist tradition from Andrew Kliman and our views of the Soviet Economy and Planning are contained in our History of Market Socialism( see August 2008 Posts) , nevertheless despite differences over history Political Economy Research holds in high regard Andrew Kliman's current work Reclaiming Marx's Capital.
Posted by nickglais at 10:43 AM