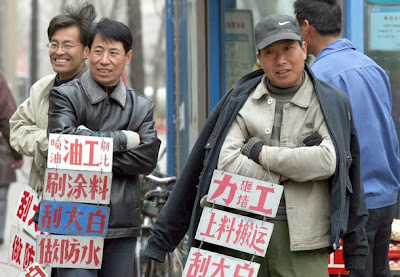 Companies in two Chinese provinces, Shandong and Hubei, have been told they must seek official consent if they want to lay off more than 40 people.

In Shandong alone, nearly 700,000 people have lost their jobs this year.

In southern Guangdong, tens of thousands of firms have closed, sparking off reverse migration to the countryside by redundant workers.

China's economic growth has slowed sharply this year to around 8 percent - high by world standards, but much less than the double-digit figures seen for years.

If the one-off boost from the Olympics is factored in, even that number may be further reduced.

It is kicking in at a time when the country's factories normally rev up production to serve western markets in the run-up to Christmas.

If the government doesn't agree to my layoff plans, what can I do? I can't afford to pay them all

The Chinese authorities are keen to avoid social instability, seen as a source of labour and political unrest.

The human resources controls imposed in Shandong and Hubei are an attempt to put bureaucratic obstacles in the way of mass layoffs.

But it is unclear how effective they will be.

"The factories are not getting enough orders, so some workers have nothing to do," Chinese media quote a Shandong factory manager as saying.

"I have been thinking of getting rid of some of them to cut costs. But if the government doesn't agree to my layoff plans, what can I do? I can't afford to pay them all."

The alternative may be drastic wage cuts.

In one factory in Guangdong, salaries have been reduced by up to 75%.

Although that is hardly a sustainable pay level for most workers, they may have to wait until the economic climate improves in China's foreign markets.

The crisis has helped expose the extent to which the country has become dependent on the outside world - a far cry from the Mao-era slogan of self-reliance.