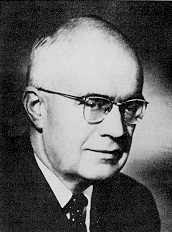 Born 1904 near Lodz, Poland, the son of a textile merchant. Studied law and economics at Poznan and Cracow, where he graduated in 1928. His socialist tendencies led him into the "neutral" camp of statistics, which he taught for several years at Cracow.

In 1934, a Rockefeller fellowship brought him to England and the United States. In 1936, Lange began teaching at the University of Michigan then, in 1938, he became a professor at the University of Chicago. Towards the end of World War II, in a highly controversial move, Lange broke with the Polish government-in-exile in London and transferred his support to the Lublin Committee sponsored by the Soviet Union.

Lange actually served as the go-between for Roosevelt and Stalin in 1944 during discussions of the post-war Polish borders and character of its government). In 1945-6, he left Chicago and was appointed the Polish Ambassador to the United States. In 1946, Lange served as the Polish delegate to the United Nations Security Council. He returned to Poland in 1947, where he continued working for the Polish government, while continuing his academic pursuits at the University of Warsaw and the Central School of Planning and Statistics.

The bulk of Lange's contributions to economics came during his American interlude of 1933-1945. Although a socialist, Lange deplored the Marxian labor theory of value, being very much a believer in the Neoclassical theory of price.

He put these two together famously in his 1938 On the Economic Theory of Socialism, where he argued that a state-run economy could at least be as efficient - if not more efficient -- than a free market economy. Lange argued that this was possible if the government planners used the price system as if in a market economy and instructed state industry managers to respond parametrically to the state-determined prices (minimize cost, etc.).

He is also important because he took part in a famous debate on the law of value in 1944.An article on Teaching Economics in the Soviet Union was published in the magazine Under the Banner of Marxism N.7-8 in 1943. No author was given, the editor was A Leontiev (We quote from a translation given in the American Economic Review in September 1944.).

In this article, which purports to investigate the economic laws of socialism, we find out old friends (then very new) the commodity with a socialist nature and the transformed law of value as far as we know this was their first appearance :

" the law of value under socialism is not abrogated but continues to exist, although it functions under different conditions, in a different environment and when compared with capitalism, reveals most radical differences.. cost accounting which is based on the conscious use of the law of value, is an indispensible method for the planned leadership of economy under socialism.

"In socialist society the product of labour is a commodity; it has use value and value. This means that labour in socialist society has two aspects: on the one hand concrete labour producing use values and on the other hand abstract labour, a definite portion of the aggregate labour expended on social production. But this dual character of labour is no longer linked to the contradiction between private and social labour which is characteristic of commodity production on the basis of private property"

In other words, it is no longer the bearer of those contradictions which in their futher development inevitably lead to the rise of capitalist exploitation, crises etc.

The writer does not go into the question of how the commodity of which Marx showed to be a product of private production for sale, is the form taken by the product in socailst production.

It does not appear that any controversy developled out of the publication of this article, which clearly represents revisionism at a high level of development and in an influencial postion in the the CPSU. But there is nothing remarkable about that. The main forces of bourgeois counter revolution were not mustering behind this particular banner in 1943, but in the fascist armies.

But this article clearly shows the form that was being taken by the highest development of revisionism..

After the publication of the Article in the American Economic Review a brief discussion developled there. Raya Dunayevskaya disagreed with the view that the law of value operates in a socialist economy.

But Oscar Lange then in the employment of the US government rallied to the defence of his colleagues in Russia.

"Miss Dunayevskaya is entirely mistaken when she maintains that the Marxian law of value entails the concepts of surplus value and exploited labour.It seems that Miss Dunayevskaya fails to distinguish between two entirely different Marxisn concepts ie commodity production and capitalist production. The latter is only a special case of the first, not equivalent to it. American Economic Review March 1945.

But has we have seen Marx's view of capitalism was not merely a "special case" but its highest deveopment. Capitalism is equivalent to commodity production when the latter is the general form of production in a society.

The law of value at its fullest development does entail surplus value and exploited labour according to Marxnd Engels.

Despite Miss Dunayevskaya's objection to the "socialist law of value" in 1944 she cannot be considered a Marxist critic of Modern Revisionism. This isolated correct position did not come from a Trotskyist position. It did not follow from Trotsky's own position since he declared efficient production unthinkable without the market. Miss Dunayevskya went on to break from Trotskyism and develop a State Capitalist theory of the Soviet Union, no doubt influenced by these theoretical exchanges with the revisionist Oscar Lange.

Marx had nothing but contempt for those who, like Adolph Wagner,or an Oscar Lange who tried to lift the theory of value out of its capitalistic context and transform it into a "universal theory of value." and would have lambasted the efforts of Oskar Lange for attempting the same transformation with a "socialist law of value".

For more about Adolph Wagner visit :
http://www.marxists.org/archive/marx/works/1881/01/wagner.htm
Posted by nickglais at 9:10 AM