From Field to Fork: Obama’s agri recipe for India 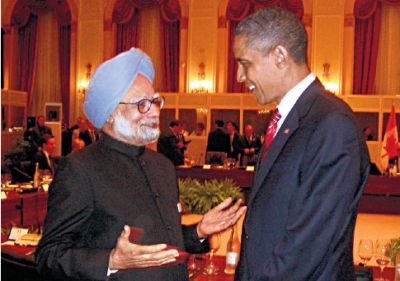 The government of the USA has planned for India to become an important consumer of its agricultural exports and crop science. India has also been planned as a host country for an agricultural research agenda directed by American crop-seed biotech corporations. This is to be achieved through a variety of programmes in India, some of which began their preparation two years ago. This agenda, labelled as US-India cooperation by India’s current UPA-2 government and by the USA’s current Barack Obama administration, has the support of the American farm sector, but not that of India’s farmers and cultivators. The clear and blunt objective is to increase US agricultural exports and to widen as quickly as possible the trade surplus of the US agricultural sector.

This agenda has become clear following the three business and industry meetings held during the visit of US President Barack Obama-’US-India Business and Entrepreneurship Summit’ in Mumbai on 6 November, ‘India-US: An Agenda for Co-Creation’ with the Confederation of Indian Industry (CII) in New Delhi on 8 November, and ‘US-India Conclave: Partnership for Innovation, Imperative for Growth and Employment in both Economies’ with the Federation of Indian Chambers of Commerce and Industry (FICCI) in New Delhi on 9 November.

The US agri-business view has been projected in India by the US-India Business Council, a business advocacy group representing American companies investing in India together with Indian companies, with a shared aim to deepen trade and strengthen commercial ties. In a document titled ‘Partners in Prosperity -Business Leading the Way’ (November 2010), the business council stated: “India requires an ‘Ever-Green Revolution’-a new program which would engage the country’s rural sector, providing water utilization and crop management ‘best practices’ to promote greater food security-this time based on technology to increase efficiency and productivity. The effort to vitalize India’s agriculture sector should be driven by business, and the first step is improving India’s farm-to-market global supply chain.”

This business-driven trade in agricultural goods and services was given formal shape two months ago during the inaugural meeting of what is called the India-US Agriculture Dialogue, on 13 and14 September 2010 in New Delhi. India’s Foreign Secretary Nirupama Rao and USA’s Under Secretary (Energy, Economic and Agricultural Affairs) in the US State Department, Robert Hormats, co-chaired the ‘Dialogue’. Under this agreement, India and the USA have set up three working groups for: ’strategic cooperation in agriculture and food security’, ‘food processing, agriculture extension, farm-to-market linkages’, and ‘weather and crop forecasting’. The ‘Agriculture Dialogue’ is designed to be the implementing process for the India-US Memorandum of Understanding for Cooperation in Agriculture and Food Security, signed almost a year ago by Obama and Singh. On 24 November 2009, they had agreed on a Memorandum of Understanding on Agricultural Cooperation and Food Security that will, according to the US State department, ‘’set a pathway to robust cooperation between the governments in crop forecasting, management and market information; regional and global food security; science, technology, and education; nutrition; and expanding private sector investment in agriculture”.

‘Agriculture Dialogue’ is the new name given to a US-India plan for trade and investment in agriculture, which saw its genesis on 18 July 2005 when Singh and then US President George W Bush announced the ‘US–India Knowledge Initiative on Agricultural Education, Teaching, Research, Service, and Commercial Linkages (AKI)’. At the time, apart from government officials from both sides representing agriculture and crop bureaucracies, Indian and American universities and the private sector were on the AKI board. The Indian agri universities were the Govind Ballabh Pant University of Agriculture and Technology (Pantnagar, Uttaranchal), the Tamil Nadu Agricultural University (Coimbatore, Tamil Nadu) and the Indian Veterinary Research Institute (Bareilly, Uttar Pradesh). India’s private sector was represented by Venkateshwara Hatcheries Ltd, Masani Farms (its owner was a National Horticultural Board director), ITC Ltd’s Agribusiness chief executive and Wal-Mart India. The American private sector was represented by Archer Daniels Midland Company and Monsanto.

The US-India AKI has been criticised from the outset as being the means with which American agribusiness will enter India’s farm and food logistics sector. It is the AKI and its associated trade and investment programmes (apart from the research collaborations between US agri industry and Indian state agriculture universities) which have helped the conversion of India’s national agriculture research system from being farmer- and cultivator-oriented to being business- and trade-focused. The key agent of such a change is the Indian Council of Agricultural Research (ICAR) and its network of 49 institutes, six national bureau, 25 project directorates, 17 national research centres and 78 all-India coordinated research projects. Moreover, ICAR controls research, education and extension education in 44 state agricultural universities, five deemed universities, one central agricultural university (for the North-East) and four central universities. For the American agri industry-crop science combine, the ICAR network represents both scientific labour and ready access to a field testing system that is a tradition well over a century old, for the Imperial Council of Agricultural Research was established in Pusa (Bihar) in 1905.

How will American corporate farms, seed, biotech and agri equipment corporations make use of this access? The US-India Business Council drafted, in advance of the Obama visit, three ‘advocacy priorities’: (1) Opening up of multi-brand retail sector to ‘organised players’, by which it means American retail chains. ”As study after study has shown, doing so would bring efficiency, infrastructure, technology, and know-how to Indian farmers, food processors, food service providers, and other suppliers,” claims USIBC. (2) Backing up the Agriculture Dialogue by the lowering of tariff and non-tariff barriers which are ”affecting trade in fresh fruits and vegetables, poultry, pistachios, dairy products, and horticultural products - we also seek reduced customs duties on items such as processing equipment, restaurant equipment, and related goods”, says the USIBC. (3) Encouraging US companies to display to India their ‘’success stories of business sector intervention in agriculture and food processing”. Doing so can ”raise awareness in a positive way about how ‘best practices’ and technologies can deliver greater efficiencies” so that India can achieve the ‘Evergreen Revolution’.

During Obama’s visit, in both Mumbai and New Delhi, the business and financial media were already being treated to ‘awareness raising’ on this subject: ”Monsanto’s revolutionary cotton seeds have helped double India’s cotton output in just six years”, ”PepsiCo has helped Punjab diversify its agriculture by introducing major citrus orchards”, ”Cargill’s Nourishing India program provides nutrient-fortified edible oils to 25 million Indians per month”, ”McDonalds and Heinz have developed new efficiencies, transforming the lettuce and tomato industries in India” and ”Walmart’s wholesale cash and carry stores connect farmers directly to small retailers, eliminating costly intermediaries”. This barrage of propaganda has been carefully orchestrated on both sides, the Indian and the American.

By mid-2010, the position of the Ministry of Agriculture, Government of India, became clear. In an address during the 28-29 July 2010 ICAR-Industry Meet, Union Agriculture Minister Sharad Pawar said that his ministry recognises the role of the private sector in critical areas of agricultural research and human resource development. The conventional approach of public sector agricultural R&D has been to take responsibility for priority setting, resource mobilisation, research, development and dissemination. He then explained that agricultural extension, which has been neglected for several years now, is ”no longer appropriate”. The alternative, Pawar advised, is public-private partnerships through which public sector institutes (such as those in the ICAR network) can ”leverage valuable private resources, expertise, or marketing networks that they otherwise lack”. This is the undisguised merchant reasoning behind the creation of ‘Business Planning and Development units’ in five ICAR institutes (Indian Agricultural Research Institute, Indian Veterinary Research Institute, Central Institute for Research on Cotton Technology, National Institute of Research on Jute and Allied Fibre Technology, Central Institute of Fisheries Technology). These units will tackle intellectual property management, commercialisation of research, find investors and begin businesses. India’s National Agricultural Research System, therefore, has decided to now become a broker of its own output (publicly funded) and a speculator seeking profits from the country’s agricultural and food price crises.

In the same month (July), the Department of Industrial Policy and Promotion (DIPP) of the Ministry of Commerce released a discussion paper entitled ‘Foreign Direct Investment (FDI) in multi-brand retail trading’. This paper, said the DIPP, was circulated to “generate informed discussion on the subject” which will ”enable the Government to take an appropriate policy decision at the appropriate time”. However, that consultative pose was neutralised by the central government taking a position against the arguments protesting FDI in retail. The ‘limitations’ of current conditions in the Indian retail sector were described as:

Read more »
Posted by nickglais at 6:58 AM No comments:

Posted by nickglais at 2:47 PM No comments:


A Talk on Marx's Method from David Harvey on Vimeo.
Posted by nickglais at 12:34 PM No comments: