Can Iceland and Latvia pay the foreign debts run up by a fairly narrow layer of their population? The European Union and International Monetary Fund have told them to replace private debts with public obligations, and to pay by raising taxes, slashing public spending and obliging citizens to deplete their savings.

Resentment is growing not only towards those who ran up the debts – Iceland’s bankrupt Kaupthing and Landsbanki, with its Icesave accounts, and heavily geared property owners in the Baltics and central Europe – but also towards the foreign advisers and creditors who put pressure on these governments to sell off the banks and public companies to insiders. Support in Iceland for joining the EU has fallen to just over a third of the population, while Latvia’s Harmony Centre party, the first since independence to include a large segment of the Russian-speaking population, has gained a majority in Riga and is becoming the most popular national party. Popular protests in both countries have triggered rising political pressure to limit the debt burden to a reasonable ability to pay.

This political pressure came to a head over the weekend in Reykjavik’s parliament. The Althing agreed a deal, expected to be formalised on Monday, which would severely restrict payments to the UK and Netherlands in compensation for the cost of bailing out their Icesave depositors.

This agreement is, so far as I am aware, the first since the 1920s to subordinate foreign debt to the country’s ability to pay. Iceland’s payments will be limited to 6 per cent of growth above 2008’s gross domestic product. If creditors thrust austerity on the Icelandic economy there will be no growth and they will not get paid.

A similar problem was debated 80 years ago over Germany’s first world war reparations. But many policymakers remain confused over the distinction between squeezing out a domestic fiscal surplus and the ability to pay foreign debts. No matter how much a government may tax its economy, there is a problem turning the money into foreign currency. As John Maynard Keynes explained, unless debtor countries can export more, they must pay either by borrowing or by selling off domestic assets. Iceland today has rejected these self-destructive policies.

There is a limit to how much foreign payment an economy can make. Higher domestic taxes do not mean a government can translate this revenue into foreign exchange. This reality is reflected in Iceland’s position on its Icesave debt – estimated to amount to half its entire GDP.

In taking this stand, Iceland promises to lead the pendulum swing away from the ideology that debt repayments are sacred.

In the post-Soviet economies the problem is that independence in 1991 did not bring the hoped-for western living standards. Like Iceland, they remain dependent on imports. Their trade deficits have been financed by the global property bubble – borrowing in foreign currency against property that was free of debt at independence. Now the bubble has burst and it is payback time. No more credit is flowing to the Baltics from Swedish banks, to Hungary from Austrian banks or to Iceland from Britain and the Netherlands. Unemployment is rising and governments are slashing healthcare and education budgets. The resulting economic shrinkage is leaving large swathes of property in negative equity.

Austerity programmes were common in developing countries from the 1970s to the 1990s, but European democracies have little tolerance for such an approach. As matters stand, families are losing their homes and emigration is accelerating. This is not what capitalism promised.

Populations are asking not only whether debts should be paid, but – as in Iceland – whether they can be paid. If they cannot be, then trying to pay will only shrink economies further, stopping them becoming viable.

Will Britain and the Netherlands accept Iceland’s condition? Trying to squeeze out more debt service than a country could pay requires an oppressive and extractive fiscal and financial regime, Keynes warned, which in turn would inspire a nationalistic political reaction to break free of creditor-nation demands. This is what happened in the 1920s when Germany’s economy was wrecked by the rigid ideology of the sanctity of debt.

A pragmatic economic principle is at work: a debt that cannot be paid, will not be. What remains an open question is just how these debts will not be paid. Will many be written off? Or will Iceland, Latvia and other debtors be plunged into austerity in an attempt to squeeze out an economic surplus to avoid default?

The latter option may drive debt-laden countries in a new direction. Eva Joly, the French prosecutor brought in to sort out Iceland’s banking crisis, warned this month that Iceland would have little left but its natural resources and strategic position: “Russia, for example, might well find it attractive.” The post-Soviet countries are already seeing voters shift away from Europe in reaction to the destructive policies the EU supported.

Something has to give. Will rigid ideology give way to economic reality, or the other way round?

The writer is professor of economics at the University of Missouri
Posted by nickglais at 12:19 AM No comments:

Posted by nickglais at 1:03 PM No comments: 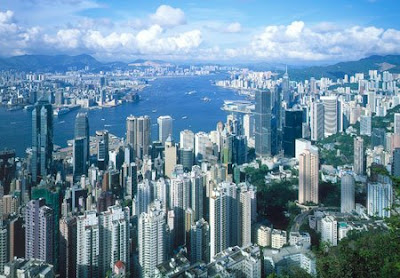 RANDALL W. FORSYTH, Riding the China Tiger, UP AND DOWN WALL STREET DAILY,

"PONZI SCHEME" gets thrown around a lot since Bernie Madoff made it part of the popular vernacular but it's worth paying attention when Andy Xie uses it.

"Chinese asset markets have become a giant Ponzi scheme, writes the highly regarded former Morgan Stanley Asian economist, Andy Xie. "The prices are supported by appreciation expectation. As more people and liquidity are sucked in, the resulting surging prices validate the expectation, which prompts more people to join the party. This sort of bubble ends when there isn't enough liquidity to feed the beast."

(www.ritholtz. com) for bringing Xie's piece to my attention.)

The Shanghai Composite has nearly doubled from its lows last November, leaving the rallies in Western bourses in its dust. The rally in China also has produced the frenetic trading that are hallmarks of a bubble.

Others argue that high asset prices in China aren't a bubble but a reflection of the nation's high growth potential. "An element of judgment based on experience is inevitable when one calls a market boom a bubble. I have had a reasonably good record at calling bubbles in the past," Xie asserts with no false modesty.

China's property market has been bid up to levels that rental yields on commercial real estate are negligible, leaving price appreciation the only source of return, Xie explains. Moreover, local governments depend on taxes from property sales, so they keep prices aloft by carefully controlling land sales. State-owned companies borrow from state-owned banks to buy land from local governments. "The money circulates in the big government pocket." But the bubble results in overbuilding that leads to the bust and a surge in bad loans.

The stock market, he continues, is in the final frenzy. "The most ignorant retail investors are being sucked in by the rising momentum. They again dream of getting rich overnight."

That's especially true of the young, who can see their holdings gain more in value in a day than their monthly salaries, Xie continues. They usually lose, but the idea that government won't let the market drop is rooted in Chinese market psychology, especially before Oct. 1, the 60th anniversary of the Peoples Republic. "This sort of belief is self-fulfilling in the short term. The market tends to roll over around the time. If the past is of meaningful guidance, this wave will taper off before October," says Xie.

As always, bubbles are inflated by excess liquidity. "How far the bubble would go depends on the government's liquidity policy. The current bubble wave is very much driven by the government encouraging banks to lend and the super low interbank interest rate. As the Fed's interest rate is zero, the dollar is weak, China 's foreign exchange reserves are high, and the loan-deposit ratio is low, China could increase liquidity, which would expand the bubble further. However, other considerations may motivate the government to cool it off."

The key will be the dollar. The economist contends that weak dollar periods have always spurred emerging-market rallies as capital floods into those sectors, which is reversed when the dollar recovers. Not coincidentally, China and other emerging markets are at highs while the Dollar Index is declining and closing in on its record lows.

Xie thinks Chinese authorities will try to deflate the bubble in a stop-go fashion ‹withdrawing liquidity to bring down prices and expanding once they are deflated. The correction could begin in the fourth quarter but could lead to a renewed frenzy in 2010 when a new wave of liquidity is released, he says.

The ultimate end of the China bubble will come when the dollar reverses course from Federal Reserve tightening policy similar to the Volcker era in 1979-82 to counter soaring inflation. That could result in a collapse like the 1990s Asian crisis. But Xie sees this as a risk for 2012.

"Chinese asset markets have become a giant Ponzi scheme, writes the highly regarded former Morgan Stanley Asian economist, Andy Xie. "The prices are supported by appreciation expectation. As more people and liquidity are sucked in, the resulting surging prices validate the expectation, which prompts more people to join the party. This sort of bubble ends when there isn't enough liquidity to feed the beast."
Posted by nickglais at 4:25 AM No comments: 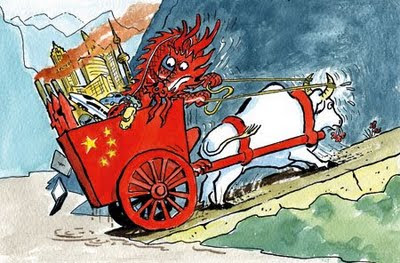 However, correspondents say unemployment remains a sensitive subject for Beijing and no overall figures are available.
Posted by nickglais at 8:21 PM No comments: