Part 11. Chairman Mao on the Law of Value 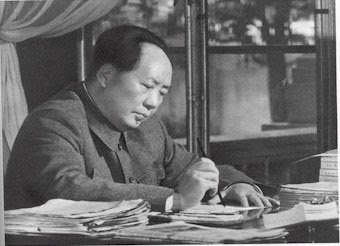 We did not carry through the Great Leap on the basis of the demands of the law of value but on the basis of the fundamental economic laws of socialism and the need to expand production. If things are narrowly regarded from the point of view of the law of value the Great Leap would have to be judged not worth the losses and last year's all-out effort to produce steel and iron as wasted labor. The local steel produced was low in quantity and quality, and the state had to make good many losses. The economic results were not significant, etc.

The partial short-term view is that the campaign was a loss, but the overall long-term view is that there was great value to the campaign because it opened wide a whole economic construction phase. Throughout the country many new starts in steel and iron were made, and many industrial centers were built. This enabled us to step up our pace greatly.

From the standpoint of one, two, or three years the value of the grain to pay for so much labor was naturally quite high. But in the longer view the campaign could considerably increase grain production and accelerate it too, and stabilize agricultural production, and so the value of commodities per unit gains. All this then goes toward satisfying the people's need for grain. The continuing development of agriculture and light industry creates further accumulation for heavy industry.

This too benefits people in the long run. So long as the peasants and the people of the entire country understand what the state is doing, whether money is gained or lost, they are bound to approve and not oppose. From among the peasants themselves the slogan of supporting industry has been put forward.

There is the proof! Stalin as well as Lenin said, "In the period of socialist construction the peasantry must pay tribute to the state." The vast majority of China's peasants is "sending tribute" with a positive attitude. It is only among the prosperous peasants and the middle peasants, some 15 percent of the peasantry, that there is any discontent. They oppose the whole concept of the Great Leap and the people's communes.

In sum, we put plans ahead of prices. Of course we cannot ignore prices. A few years ago we raised the purchase price for live pigs, and this had a positive effect on pigbreeding. But for the kind of large-scale, nationwide breeding we have today, planning remains the main thing we rely on.

Page 521 refers to the problem of pricing in the markets of collective farms. Their collective farm markets have too much freedom. It is not enough to use only state economic power to adjust prices in such markets. Leadership and control are also necessary. In our markets, during the first stage, prices were kept within certain bounds by the government. Thus small liberties were kept from becoming big ones.

Page 522 says, "Thanks to our command of the law of value, the kind of anarchy in production or waste of social labor power the law entails under capitalism is not found in a socialist economy."

This makes too much of the effects of the law of value. In socialist society crises do not occur, mainly because of the ownership system: the basic laws of socialism, national planning of production and distribution, the lack of free competition or anarchy, etc., and not because we command the law of value. The economic crises of capitalism, it goes without saying, are determined by the ownership system too.

This extract is from Mao - Critique of Soviet Economics on the right hand side of this page.
Posted by nickglais at 11:05 AM