The Chinese State & Economy - the view of Democracy and Class Struggle for Socialist Renewal. 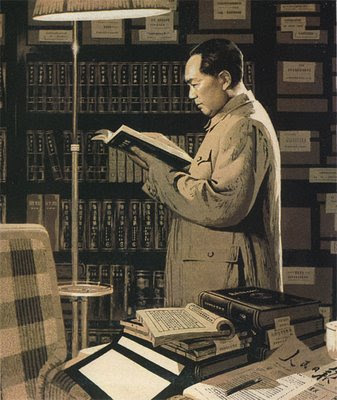 The following contributions on this Political Economy Research site are to provide an understanding of the capitalist transformation of the Chinese Economy - however we need to deal with the question of the Economy and the Chinese State at the outset.

It is possible to conceive of a Socialist State administering a capitalist economy and some hybrid of power relations called the State Socialist Market Economy similar to the NEP period in the Soviet Union.

We go into this in detail in an article on NEP in the section on the History of Market Socialism part 5 as well as the contribution of Wu Bing attached to the NEP section to compare unfavourably NEP with Chinese Reform process.

Concerning the role of the State in China - it is true to say that it still plays a key role in the Economy but so do most capitalist states in the world. We think a comment by Bertell Ollman on the state is worth repeating in this regard.

"The centrality of accumulation in capitalism also forces the state to undertake a function that does not exist in other class societies, and that is helping the capitalists realize the value of their products. Given how capitalism works, capitalists simply require more direct political help in their efforts to enrich themselves than did feudal aristocrats or the slave owners of antiquity.

They require what amounts to state planning on their behalf-and they get it. While rendered mostly invisible by their ideology, such planning covers everything from investing, to financing, to doing research, to training workers, to buying, to selling the finished products. Most of our tax, trade, labor, and monetary policies (including both laws and their administration) some under the rubric of capitalist planning. The political institutions and practices that serve capitalist interests in these ways are essential parts of the capitalist state"Why Do We Need a Theory of the State by Bertell Ollman.

To view the Dengist period has involving no shift of State Power in China is to ignore the realities of the time.The ascendancy of the Dengists who were a minority force in the State apparatus under Mao who asserted complete control of the State apparatus after 1978 to drive through the Market Reform Process marginalised any socialist opposition.

However the Dengists while the dominant force in the Chinese State they never were in Society at large (The reason for the indicate left but turn right policies.) The socialist forces which had been in a majority became a minority in the State similar to the capitalist roaders under Mao.

There is some plausibility (but wrong) in calling China State Market Socialist in the early years of the Deng Reforms when you just had a few isolated Special Economic Zones but by 1992, if you use the intellectual apparatus of Marxism ,what you see is the extention of Market Reforms to the rest of the Chinese Provinces and wholesale dismantling of the State sector with an attack on collective property and the wholesale implementation of the Guangdong free market model for the whole of China.

We see entirely new production relations emerging in China in the 1990's. The end of the danwei or work unit which combined production and consumption,education and health the separation of the means of production from working people with privatisation of State assets.The laying off of the old working class in the factories and in the mines the use of hired gangs from the countryside with no knowledge of mining causing one of the highest mining accident rates in the world.

Gong Xiantian in his open letter informed us that the ouput from the State sector is below 17% of total output in China and that basically the market has put itself in command and not the party and the people as in the past.

The Communist Party of China is now riding a market Tiger which will consume it unless radical actions are taken to re-institute mechanisms of economic control from the centre and the democratisation of society at large.

The creation of a new working class based on super exploitation in the new factories of peasants pouring in from the countryside without rights of residence in the factory towns and cities basically second class citizens depriving them of access to education and health services which are just provided for locals..

Discussion has started in China to privatise land has they have already done with industry hopefully this will re-energise the peasants and workers to combine and re-establish the fight for socialism.

Production relations in China have changed in most dramatic way in the last 30 years, The means of production have been wrested from the working class and privatised.The most equal country in the world in 1978 is now heading for the inequality of South Africa and Brazil..

Take the State Industry sector the Govenor of the Central Bank of China Zhou Xiachuan boasts how one third have been fully privatised one third put on hold for potential buyers and one third closed. Even nominal State shares in privatised companies are scheduled to be sold by State to pay pensions.

The Township and Village Enterprises built up in Mao's time and which formed the basis of China's economic growth have become private property in most cases taken over by a local bureaucrat has his own possession.

The robbery of public assets and public property by powerful individuals in China is one of the biggest expropriations of the working class in history and the new bureaucrat "cadre" capitalists are not satisfied with that now they are eyeing the land for privatisation.

There are clearly voices in China in the Society the State and the Communist Party not just unhappy with this turn of events but seeking to re-orientate China away from the market direction which has now run its course - and put Socialism back on the agenda.

These are tiny steps and the movement for Socialist Renewal in China is young like the new century but it will grow and win back the lost positions of the last 30 years in the economy in the the party and society in China has it gains clarity abouts its defeats and its future.

Foreward to a renewal of Chinese Socialism.Has Henry CK Liu writes on his essay on Mao :

"The full impact of Mao's revolutionary spirit is yet to be released on Chinese society. A century from now, Mao's high-minded principles of mass politics will outshine all his neo-liberal critics".
Posted by nickglais at 6:22 AM

The restorationists have the upper hand but are yet to completely dismantle vestiges of socialism. These provide some defence for the people and some residual legitimacy for the ruling bureaucrats, but are rapidly disappearing, leading to increasingly frequent, spontaneous but unconnected outbursts or "mass incidents". One such, which may have arisen out of nothing more than rumours, occurred recently in Weng'an of Guizhou Province.

The incredibly high levels of social and economic equality that existed during the Mao era have disappeared. The Gini Co-efficient for China is a disaster.

If land is privatised, and there is a big push for this, the rural workers that have flooded the cities will have nowhere to return to when they are laid off and will increasingly form permanent slum cities of the type we see in India, Brazil and Manila. They can wave the red flag over that as much as they want, but a slum is a slum is a slum.

While you clearly argue the capitalist character of contemporary China you still leave space for communists in China to work within or without the Party.

The residual Communists within the State and and the Communist ideal within Society can also provide political cover for the re emergence of a genuine communist movement in China.