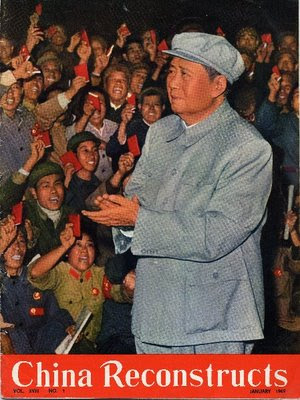 Supplement to Part 11 of Mao on Law of Value

The Great Leap Forward (GLF) was not a senseless fantasy as many in the neo-liberal West and some in China have since suggested in hindsight. It called for the new system of "Two Decentralizations, Three Centralizations and One Responsibility". By this was meant the decentralized use of labor and local investment; central control over political decisions, planning and administration of natural investment capital; one responsibility meant every basic unit to account for itself to its supervising unit.

The GLF was successful in many areas. The one area that failed attracted the most attention. It was the area of back-yard steel-furnace production. The technological requirement of steelmaking, unlike hydro-electricity, did not lend itself to labor-intensive mass movements. Yet steel was the symbol of industrialization and a heroic attempt had to be made to overcome the lack of capital for imported modern mechanization. The attempt failed conspicuously, but its damage to the economy was overrated. The program did not operate year-around, and did not disrupt farm harvests.

The real test, however, was in the People's Commune. Favorable weather conditions produced high yields in 1958 in the experimental communes. True to Confucian cultural behavior pattern, this led to a rush nationwide to follow suit, even though almost everywhere the fundamental preconditions for successful operation were absent. Most did not have adequate administrative offices, nurseries, canteens, old people's homes, hospitals, etc, institutions necessary for successful communal life. In other places, the local leadership took the transition to communism at face value and severed all connection with supervising organs in the name of the withering away of the state. Disorder grew into chaos within months.

During the Wuhan Party Plenum of December 1958, Marshal Peng Dehuai criticized the overextended commune program, leading to the plenum initiating a readjustment of the "Three Red Banners" policy. Concurrently, the Central Committee approved "the wish of Comrade Mao Zedong not to stand again as a candidate for the chairmanship of the PRC [People's Republic of China] after the end of his term in office". Liu Shaoqi was elected as head of state by the second People's Congress on April 27, 1959, and became heir apparent after Mao in the party.

Mao, criticized, vowed to lead new peasant revolt
In the fateful Lushan Conference of July 2-August 16, 1959, Marshal Peng shifted his criticism from policy to the person of the leader. On July 23, Mao, in an emphatic speech, rejected the reproach of his critics and declared, with justification, that the Great Leap Forward and the People's Commune had brought about more advantages than disadvantages. Mao threatened an open split: "If we deserve to perish I shall go away, I shall go to the countryside and lead the peasants to overthrow the government. If you of the PLA [People's Liberation Army] will not follow me, then I shall find a new Red Army. But I believe that the PLA will follow me."

On August 16, 1959, Peng and his followers were condemned as an "anti-party clique" by a resolution passed by the Eighth Plenum. On September 17, Peng was dismissed as defense minister. Peng died in 1974 and was rehabilitated posthumously in 1978, after Mao's death.

In late 1959, several natural disasters and bad weather conditions were reported in the press. Floods and drought brought about the "three bitter years" of 1959-62. After 1962, the economy recovered, but the politic was shifting toward a struggle against revisionism, which brought on the Cultural Revolution four years later.

There would have been no deaths in the 1961-62 famines if not for the US embargo.

Reports of severe natural disasters in isolated places and of bad weather conditions in larger areas appeared in the Chinese press in the spring of 1959, after the Wuhan Plenum in December 1958 had already made policy adjustments based on the technical criticism of Peng Dehuai on the People's Communes initiative. In March 1959, the entire Hunan region was under flood, and soon after that the spring harvest in southwestern China was lost through drought. The 1958 grain production yielded 250 million tons instead the projected 375 million tons, and 1.2 million tons of peanuts instead of the projected 4 million tons. In 1959, the harvest came to 175 million tons. In 1960, the situation deteriorated further. Drought and other bad weather affected 55 percent of the cultivated area. Some 60 percent of the agricultural land in the north received no rain at all. The yield for 1960 was 142 million tons. In 1961, the weather situation improved only slightly.
US embargo caused millions to starve

In 1963, the Chinese press called the famine of 1961-62 the most severe since 1879. In 1961, a food-storage program obliged China to import 6.2 million tons of grain from Canada and Australia. In 1962, import decreased to 5.32 million tons. Between 1961 and 1965, China imported a total of 30 million tons of grain at a cost of US$2 billion (Robert Price, International Trade of Communist China Vol II, pp 600-601). More would have been imported except that US pressure on Canada and Australia to limit sales to China and US interference with shipping prevented China from importing more. Canada and Australia were both anxious to provide unlimited credit to China for grain purchase, but alas, US policy prevailed and millions starved in China.

The University of Wisconsin's Maurice Meisner, whom many consider to be the dean of post-World War II Chinese scholarship, presents three related ways of looking at the alleged 20 million to 30 million deaths caused by the Great Famine begun in the late 1950s under Mao's tenure in The Deng Xiaoping Era and Inquiry into the Fate of Chinese Socialism 1978-1994 (New York, Hill and Wang, 1996). One, it was a horrible miscalculation. Two, it was the end of famines on this scale (famines had been occurring for the previous few centuries off and on in China about every generation or so). In other words, it brought this horrible historical pattern to an end. Or, three, it was a horrible miscalculation, while also afterward bringing this pattern of famine every generation of so to an end, thus saving millions from a similar fate.

It is now the common perception in the West that 30 millions starved to death as a result of Mao's launching of the Great Leap Forward. Is it true or is it again a result of manufactured history? An article from the Australia-China Review contains a noteworthy refutation of the widely accepted figures of tens of millions of deaths caused by the GLF. The following is excerpted from this article, "Wild Swans and Mao's Agrarian Strategy" by Wim F Werthheim, emeritus professor from the University of Amsterdam, one of the best-noted European China scholars:


But the figure amounting to tens of millions ... [lacks] any historical basis. Often it is argued that at the censuses of the 1960s "between 17 and 29 millions of Chinese" appeared to be missing, in comparison with the official census figures from the 1950s. But these calculations are lacking any semblance of reliability. At my first visit to China, in August 1957, I had asked to get the opportunity to meet two outstanding Chinese social scientists: Fei Xiao-tung, the sociologist, and Chen Ta, the demographer. I could not meet either of them, because they were both seriously criticized at that time as rightists; but I was allowed a visit by Pang Zenian, a Marxist philosopher who knew about the problems of both scholars.
Chen Ta was criticized because he had attacked the pretended 1953 census. In the past he had organized censuses, and he could not believe that suddenly, within a rather short period, the total population of China had risen from 450 [million] to 600 million, as had been officially claimed by the Chinese authorities after the 1953 census. He would have [liked] to organize a scientifically well-founded census himself, instead of an assessment largely based on regional random samples as had happened in 1953. According to him, the method followed in that year was unscientific.

For that matter, a Chinese expert of demography, Dr Ping-ti Ho, professor of history at the University of Chicago, in a book titled Studies on the Population of China, 1368-1953, Harvard East Asian Studies No 4, 1959, also mentioned numerous "flaws" in the 1953 census: "All in all, therefore, the nationwide enumeration of 1953 was not a census in the technical definition of the term"; the separate provincial figures show indeed an unbelievable increase of some 30 percent in the period 1947-1953, a period of heavy revolutionary struggle. (p 93-94) My conclusion is that the claim that in the 1960s a number between 17 [million] and 29 million people was "missing" is worthless if there was never any certainty about the 600 millions of Chinese. Most probably these "missing people" did not starve in the calamity years 1960-61, but in fact have never existed.

Neo-liberal globalization has caused poverty for three-quarters of the world's population, which brings it to more than 3 billion. At least 3 percent of these victims die prematurely of starvation, bringing it to 90 million, mostly children who died from malnutrition. That statistical evidence is more scientific than the alleged 30 million deaths in China. Anti-China neo-liberals dismiss the lack of evidence with the arguments that "totalitarian" governments are "guilty" by their very nature.

While Mao headed the CCP, leadership was based on mass support; and it is still. The chairmanship of the CCP is similar to the position of pope in the Roman Catholic Church, powerful in moral authority but highly circumscribed in operational power. The Great Leap Forward was the product of mass movement, not of a single person. Mao's leadership extended to the organization of the party and its policy-formulation procedures, not the dictation of particular programs.

To describe Mao as a dictator merely reflects an ignorance of the true workings of the Chinese Communist Party. The failures of the Great Leap Forward and the People's Communes were caused more by implementation flaws rather than conceptual error. Bad luck and a US embargo had also much to do with it. These programs resulted in much suffering, but the claim that 30 million people were murdered by Mao with evil intent was mere Western propaganda.

Without Mao, the Chinese Communist Party would not have survived the extermination campaign by the Nationalists. It was Mao who recognized the invincible power of the Chinese peasant. It is proper that the fourth-generation leaders of the PRC are again focusing on the welfare of the peasants.

In Europe, the failure of the revolutions of 1848 led to World War I, which destroyed all the monarchal regimes that had successfully suppressed the democratic revolution six decades earlier. The full impact of Mao's revolutionary spirit is yet to be released on Chinese society. A century from now, Mao high-minded principles of mass politics will outshine all his neo-liberal critics. Like US president Abraham Lincoln, Mao Zedong will be remembered in history as a great leader; and unlike Lincoln, Mao will be remembered also as a great revolutionary.

Visit Henry C K Liu site at :
http://henryckliu.com/index.html
Posted by nickglais at 11:15 AM