"What Was the Point of the G-20 Meeting?"by Immanuel Wallerstein 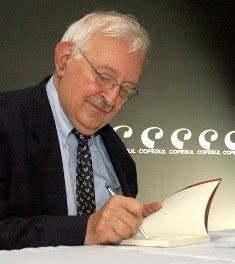 Almost everyone took the meeting of the G-20 in London on April 2 too seriously. Pundits and critics have been analyzing it as if it had been designed to accomplish some change in policies by the states which participated. The fact is that everyone who went knew in advance that nothing of any significance would change as a result of the meeting, and that the few minor changes that were adopted could easily have been arranged without the meeting.

The point of the meeting - for the United States, for France and Germany, for China - was to show their internal publics that they were "doing something" about the calamitous world economic situation when in fact they were doing nothing that would in any significant way save the sinking ship.

The meeting was perhaps most important for President Obama. He went to demonstrate three things: that he was personally popular around the world; that he would present himself in a radically different diplomatic style from that of George W. Bush; that the two together would make a difference.

Obama certainly demonstrated the first two. He was acclaimed by the crowds everywhere - in London, Paris, and Strasbourg, in Germany, Prague, and Turkey, as well as by U.S. soldiers in Iraq. So was Michelle Obama. And he certainly employed a different diplomatic style. His interlocutors all said he took them seriously, listened to them attentively, admitted U.S. past errors and limitations, and seemed open to compromise solutions of diplomatic disputes - nothing of which they might have accused George W. Bush.

But did this make any difference in achieving U.S. diplomatic objectives? It is hard to see in what way. The debate between, on the one hand, the U.S. approach to reigniting the world-economy (more "stimulus"), an approach supported by Great Britain and Japan and, on the other hand, the Franco-German approach (more international "regulation" of financial institutions) was in no way resolved. Whatever the merits of the two arguments, both sides stuck to their guns, and the communiqué simply papered over the differences.

It is true that the G-20 agreed to put together a package of 1.1 trillion dollars to be given to the International Monetary Fund (IMF) to issue so-called Special Drawing Rights (SDRs) as part of a "global plan for recovery on an unprecedented scale." But as many commentators have pointed out, the scale of the effort is far less than is implied. First of all, part of this is not new money. Secondly, this is financing and not necessarily spending. Thirdly, 60% of the SDRs will go to the United States, Europe, and China, who do not need them. And fourthly, 1.1 trillion isn't all that much, when placed beside the 5 trillion already being provided in the fiscal stimulus plans around the globe.

Everyone came out against protectionism, and proposed to do things about it. But there were no enforceable measures adopted. In addition, there are three different kinds of protectionism in question. The first is protecting one's own industries, something which virtually all G-20 members are already doing and most probably will continue to do. The second is regulating hedge funds and rating agencies. The Chinese cheer this on, while the United States and western Europe are hesitant. The third is regulating tax havens. The Europeans are pushing for this, the Chinese are very cool on the idea, and the United States is somewhere in-between. Nothing changed at London.

The French and the Germans seemed to use the London meeting more to demonstrate that the geopolitical commitments they refused to make for Bush they would continue to refuse to make for Obama. The German newspaper, Der Spiegel, was harsh in its judgment. It said the cause of the financial disaster is that George W. Bush had been a "poppy farmer" who had "flooded the entire world [with cheap dollars],...creating sham growth and causing a speculative bubble...." Worse still, "the change in government in Washington has not brought a return to self-restraint and solidity. On the contrary, it has led to further abandon." Its conclusion: "German Chancellor Angela Merkel is right. The West may very well be giving itself a fatal overdose."

In the geopolitical arena, the Franco-German approach to Afghanistan is unchanged - verbal support for U.S. objectives but no more troops. Would they receive prisoners released from Guantanamo? Germany continues to say absolutely not. France magnanimously agreed to receive one - yes, one.

Obama gave a major speech in Prague outlining a call for nuclear disarmament - presumably a big change from the Bush position. The French conservative newspaper, Le Figaro, reports that the diplomatic cell in Sarkozy's inner circle took a very "abrasive" view of the speech. Just public relations, they said, masking the fact that the negotiations of the United States with Russia on this question were getting nowhere. Furthermore, France was not about to take moral lectures from the Americans. So much for Obama's new diplomatic style appeasing the West Europeans.

Elsewhere, it didn't seem to work too much better with the East-Central Europeans, where the outgoing conservative Prime Minister Mirek Topolanek of the Czech Republic denounced Obama's stimulus proposals as "a way to hell." Obama's speech to the Turkish parliament did get him great applause from all factions (except the proto-fascist right) for its concrete and modulated approach to Turkish questions. But observers noted that the language on Middle Eastern questions was both traditional and vague.

What China seemed to want from the G-20 meeting was for it to occur. China wanted to be included in the inner circle of the world's decision-makers. Holding a G-20 meeting displayed this new reality. When the G-20 decided to meet again, it thereby confirmed China's place. Will the G-8 ever meet again? That said, China showed its reserve about the actual decisions in many ways. It offered a derisory amount to the new IMF package. After all, it got no guarantees that there would be a real reform of IMF governance, which might accord an appropriate role to China.

What we can say in summary is that the principal actors strutted on the world scene. Did they ever intend to do something that was more than that? Probably not. The world economic downturn continues to wend its way, as though the G-20 meeting never occurred.

[Copyright by Immanuel Wallerstein, distributed by Agence Global. For rights and permissions, including translations and posting to non-commercial sites, and contact: rights@agenceglobal.com, 1.336.686.9002 or 1.336.286.6606. Permission is granted to download, forward electronically, or e-mail to others, provided the essay remains intact and the copyright note is displayed. To contact author, write: immanuel.wallerstein@yale.edu.
Posted by nickglais at 2:32 PM