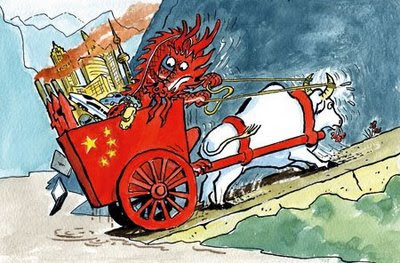 China's exports have been declining as world demand slows
Annual growth in China's gross domestic product (GDP) slowed in the first quarter of 2009 to 6.1%, the National Bureau of Statistics has announced.

This is the weakest growth since quarterly records began in 1992, but some analysts see signs of a recovery.

Growth was 6.8% in the last quarter of 2008, but the first quarter GDP figure dropped as exports fell 17% in March.

China's government has said it is determined to achieve annual growth of 8%, and to expand its domestic demand.

"There's little the Chinese government can do to help key markets for Chinese products in the US and Europe recover," said the BBC's Chris Hogg in Shanghai.

"That's why it's focussing on trying to stimulate domestic demand."

There has been a recognition among Chinese state officials that too sharp an economic slowdown could lead to growing unemployment and may fuel social unrest.
Posted by nickglais at 1:07 PM