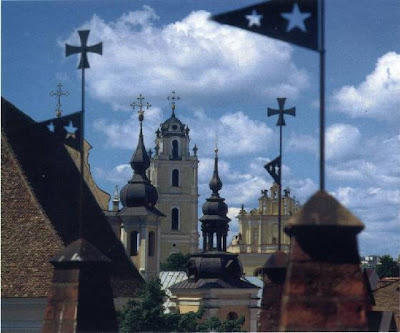 The Lithuanian government predicts growth will return in 2011

The Lithuanian economy shrank by 12.6% in the first quarter of 2009 compared with the same period last year, the country's statistics office has said.

Falling industrial output, lower demand for exported goods and a lack of credit were blamed for the decline.

It is the country's largest contraction in gross domestic product (GDP) since it started official records in 1995.

Lithuania, which joined the EU in 2004, has forecast a contraction in GDP of 10.5% for the whole of this year.

But on a quarter-to-quarter basis, the decline was 9.5%.

"Our economy is falling into deep hole, and I see no positive signs in the nearest future," said Gitanas Nauseda, an analyst at SEB Bank in Vilnius.

The country's Prime Minister, Andrius Kubilius, said, "We hope that next year we shall have a much lower GDP decrease or even stability in GDP, and then we are forecasting that we should return back to GDP growth in 2011."

The contraction in the Lithuanian economy is believed to be the largest so far of any country affected by the global recession, and marks a sharp reversal of fortunes for this small Baltic state.

The Lithuanian economy grew by 8.9% in 2007, which was a record increase for the country, but last year growth had slowed to 3%.

But falls in demand for construction, the retail industry and textile sectors have contributed to the turnaround, according to the Lithuanian office for statistics.

Analysts say the size of the decline suggests the economies of the other two Baltic states in the EU, Latvia and Estonia, are also poised to contract by more than 10%.

Estonia's central bank has already forecast that the economy there will shrink by 12% this year.

Meanwhile Latvia's Finance Ministry has predicted the country's GDP will contract by 15% in 2009.

According to the World Bank, Eastern Europe is likely to have been the hardest hit by the financial meltdown of any region.

The IMF is expecting to have to lend billions to help bail-out its damaged economies. Latvia has already sought a rescue package.