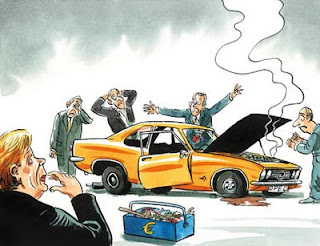 Germany's economy will shrink by 6% this year and continue to contract in 2010 according to a forecast from the country's leading economic think tanks.

The estimates, compiled by eight institutes for the German Economy Ministry, also predicts that the rate of unemployment will hit 10% next year.

The gloomy forecast chimes with that of the IMF, which shows the German economy contracting by 5.6% this year.

This is faster than any other major economy apart from Japan, says the IMF.
"The joint forecast of the institutes paints a very dark picture of German economic prospects in the foreseeable future," said Timo Klein at IHS Global Insight.

The latest twice-yearly forecast shows just how rapidly the outlook for the German economy has deteriorated.

The think tank's previous forecast predicted economic growth of 0.2% for this year.
The deepening global downturn now means the group sees a severe economic contraction this year and a further shrinkage of 0.5% next year.

"For 2010 the institutes expect no drastic rebound," the report said.
The IMF is forecasting a contraction in the German economy of 1% in 2010.
Comments by some of Germany's largest companies confirmed the bleak outlook for the country's economy.

"It will probably take five years before demand is back to its pre-crisis level in 2007," said Karl-Thomas Neumann, boss of car parts firm Continental.
The chief of rival Robert Bosch, Franz Fehrenbach, said: "We expect to see a deep recession until well into 2009."

The report for the Economy Ministry also forecasts a fall in exports of 22.6%, compared with its prediction of a rise of 0.1% made just six months ago.
Germany is world's largest exporter.

Unemployment, the report says, will hit 10.8% in 2010.
"Through 2009 we anticipate a loss of more than 1 million jobs... and in the [autumn] unemployment will be well over the 4 million mark," the think tanks said.

The IMF forecast sees the Japanese economy contracting by 6.2% this year before growing by 0.2% next year