Michael Parenti on the DPRK: “Sanity” at the Brink 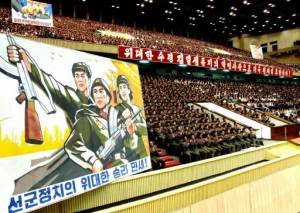 The following article by Michael Parenti is from www.michaelparenti.org


North Korea: “Sanity” at the Brink

Nations that chart a self-defining course, seeking to use their land, labor, natural resources, and markets as they see fit, free from the smothering embrace of the US corporate global order, frequently become a target of defamation. Their leaders often have their moral sanity called into question by US officials and US media, as has been the case at one time or another with Castro, Noriega, Ortega, Qaddafi, Aristide, Milosevic, Saddam Hussein, Hugo Chavez, and others.

So it comes as no surprise that the rulers of the Democratic People’s Republic of Korea (DPRK or North Korea) have been routinely described as mentally unbalanced by our policymakers and pundits. Senior Defense Department officials refer to the DPRK as a country “not of this planet,” led by “dysfunctional” autocrats. One government official, quoted in the New York Times, wondered aloud “if they are really totally crazy.” The New Yorker magazine called them “balmy,” and late-night TV host David Letterman got into the act by labeling Kim Jong-il a “madman maniac.”

To be sure, there are things about the DPRK that one might wonder about, including its dynastic leadership system, its highly dictatorial one-party rule, and the chaos that seems implanted in the heart of its “planned” economy.

But in its much advertised effort to become a nuclear power, North Korea is actually displaying more sanity than first meets the eye. The Pyongyang leadership seems to know something about US global policy that our own policymakers and pundits have overlooked. In a word, the United States has never attacked or invaded any nation that has a nuclear arsenal.

The countries directly battered by US military actions in recent decades (Grenada, Panama, Iraq, Libya, Somalia, Yugoslavia, Afghanistan, then again Iraq), along with numerous other states that have been threatened at one time or another for being “anti-American” or “anti-West” (Iran, Cuba, South Yemen, Venezuela, Syria, North Korea, and others) have one thing in common: not one of them has wielded a nuclear deterrence—until now.

Let us provide a little background. Put aside the entire Korean War (1950-53) in which US aerial power destroyed most of the DPRK’s infrastructure and tens of thousands of its civilians. Consider more recent events. In the jingoist tide that followed the September 11, 2001 attacks on the World Trade Center and the Pentagon, President George W. Bush claimed the right to initiate any military action against any “terrorist” nation, organization, or individual of his choosing. Such a claim to arbitrary power–in violation of international law, the UN charter, and the US Constitution–transformed the president into something of an absolute monarch who could exercise life and death power over any quarter of the Earth. Needless to say, numerous nations–the DPRK among them—were considerably discomforted by the US president’s elevation to King of the Planet.

It was only in 2008 that President Bush finally removed North Korea from a list of states that allegedly sponsor terrorism. But there remains another more devilishly disquieting hit list that Pyongyang recalls. In December 2001, two months after 9/11, Vice President Dick Cheney referred chillingly to “forty or fifty countries” that might need military disciplining. A month later in his 2002 State of the Union message, President Bush pruned the list down to three especially dangerous culprits: Iraq, Iran, and North Korea, who, he said, composed an “axis of evil.”

It was a curious lumping together of three nations that had little in common. In Iraq the leadership was secular, in Iran it was a near Islamic theocracy. And far from being allies, the two countries were serious enemies. Meanwhile the DPRK, had no historical, cultural, or geographical links to either Iraq or Iran. But it could witness what was happening.

The first to get hit was Iraq, nation #1 on the short list of accused evil doers. Before the Gulf War of 1990-91 and the subsequent decade of sanctions, Iraq had the highest standard of living in the Middle East. But years of war, sanctions, and occupation reduced the country to shambles, its infrastructure shattered and much of its population drenched in blood and misery.

Were it not that Iraq has proven to be such a costly venture, the United States long ago would have been moving against Iran, #2 on the axis-of-evil hit list. As we might expect, Iranian president Mahmoud Amadinijad has been diagnosed in the US media as “dangerously unstable.” The Pentagon has announced that thousands of key sites in Iran have been mapped and targeted for aerial attack. All sorts of threats have been directed against Tehran for having pursued an enriched uranium program–which every nation in the world has a right to do. And on a recent Sunday TV program, Secretary of State Hillary Clinton warned that the United States might undertake a “first strike” against Iran to prevent its nuclear weapons development.

Rather than passively await its fate sitting in Washington’s crosshairs, nation #3 on the US hit list is trying to pack a deterrence. The DPRK’s attempt at self-defense is characterized in US official circles and US media as wild aggression. Secretary Clinton warned that the United States would not be “blackmailed by North Korea.” Defense Secretary Robert Gates fulminated, “We will not stand idly by as North Korea builds the capability to wreak destruction on any target in Asia–or on us.” The DPRK’s nuclear program, Gates warns, is a “harbinger of a dark future.”

President Obama condemned North Korea’s “belligerent provocative behavior” as posing a “grave threat.” In June 2009, the UN Security Council unanimously passed a US-sponsored resolution ratcheting up the financial, trade, and military sanctions against the DPRK, a nation already hard hit by sanctions. In response to the Security Council’s action, Kim Jong il’s government announced it would no longer “even think about giving up its nuclear weapons” and would enlarge its efforts to produce more of them.

In his earlier Cairo speech Obama stated, “No single nation should pick and choose which nation holds nuclear weapons.” But that is exactly what the United States is trying to do in regard to a benighted North Korea–and Iran. Physicist and political writer Manuel Garcia, Jr., observes that Washington’s policy “is to encourage other nations to abide by the terms of the Nuclear Non-Proliferation Treaty–and renounce nuclear weapons–while exempting itself.” Others must disarm so that Washington may more easily rule over them, Garcia concludes.

US leaders still refuse to give any guarantee that they will not try to topple Pyongyang’s communist government. There is talk of putting the DPRK back on the list of state sponsors of terrorism, though Secretary Clinton admits that evidence is wanting to support such a designation.

From its lonely and precarious perch the North cannot help feeling vulnerable. Consider the intimidating military threat it faces. The DPRK’s outdated and ill-equipped army is no match for the conventional forces of the United States, South Korea, and Japan. The United States maintains a large attack base in South Korea. As Paul Sack reminds us in a recent correspondence to the New York Times, at least once a year the US military conducts joint exercises with South Korean forces, practicing a land invasion of the DPRK. The US Air Force maintains a “nuclear umbrella” over South Korea with nuclear arsenals in Okinawa, Guam, and Hawaii. Japan not only says it can produce nuclear bombs within a year, it seems increasingly willing to do so. And the newly installed leadership in South Korea is showing itself to be anything but friendly toward Pyongyang.

The DPRK’s nuclear arsenal is a two-edged sword. It can deter attack or invite attack. It may cause US officials to think twice before cinching a tighter knot around the North, or it may cause them to move aggressively toward a confrontation that no one really wants.

After years of encirclement and repeated rebuffs from Washington, years of threat, isolation, and demonization, the Pyongyang leaders are convinced that the best way to resist superpower attack and domination is by developing a nuclear arsenal. It does not really sound so crazy. As already mentioned, the United States does not invade countries that are armed with long-range nuclear missiles (at least not thus far).

Having been pushed to the brink for so long, the North Koreans are now taking a gamble, upping the ante, pursuing an arguably “sane” deterrence policy in the otherwise insane world configured by an overweening and voracious empire.
Posted by nickglais at 1:31 PM