Latvia is 'saved from bankruptcy' 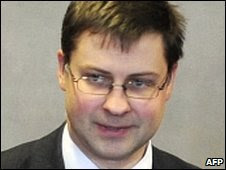 Valdis Dombrovskis told public radio that the decision late on Thursday to cut 500m lats ($1bn; £607m) from the budget was "very difficult".

But the cuts were needed for the country to receive the next instalment of its European Union bail-out loans.

The country agreed a 7.5bn euro ($10.5bn; £6.4bn) loan package in December, but must cut the budget deficit to receive the loans.

"The signals we have been getting from the European Commission are positive," he said.

The five-party coalition government agreed to a series of measures with unions and employers.

The cuts will include reducing old age pensions by 10% and cutting public sector salaries by 20%, but they decided against increasing income taxes.

Parliament will vote on the changes next week.

Latvia's currency is pegged to the euro, but the recession has hit Latvia so badly that many analysts believe it will have to devalue the lat.

Latvia's central bank has been intervening to support the currency this week.
Posted by nickglais at 1:25 PM

Hello, my name is LUMBA RICKY and am from Latvia and I was broke because I entered into a wrong business which made me loss all my money but as I was searching through the internet I saw an advert about a loan company named DR PURVA PIUS Loan Company whom can give a loan for as low as 3% interest rate with no collateral or credit card needed. I applied for a loan in the company to my greatest surprise the CEO of the company DR PURVA PIUS approved my loan of $500,000 which i used to get myself back to business. I said to myself i need to share this good news to the world so if you need any loan of any type with no collateral or credit card for as low as 3% interest rate I advice you to contact Navaro Loan Company at their email: urgentloan22@gmail.com