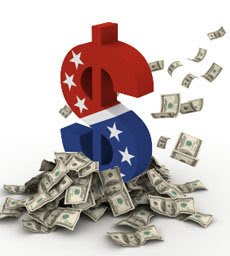 June 30, 2009 "Smart Money" -- How’s the economy treating you? Chances are, your answer is colored largely by three things: whether you’re working (if you want to), how much you’re making and how quickly your expenses are rising. Economists rely heavily on the same factors to judge the nation’s health. At last count, 9.4% of the workforce is jobless. Compared with a year ago, the goods and services we produce are worth 5.7% less while the ones we buy are 0.7% cheaper.

Two bright people might see sharply different things in those numbers. To one, the shrinking economy is a healthy unwinding of past excess, for example, while to another it’s a dangerous downturn that calls for bold government action. But what if the numbers themselves are something we should be debating? In the alarming view of a vocal few, America’s economic measures are misstated -- rigged, really.

The accusation goes like this: Surveyors collect the nation’s data and statisticians compile and report it. Politicians naturally want the numbers to show improvement. Not being able to change the facts, they focus on the handling of facts, pressuring statisticians to change their measurements. It’s not quite one grand conspiracy but decades of minor ones compiled. Today’s reports are so perverted, the theory holds, that the numbers have detached from common experience.

If the theory has a chief architect, it is John Williams, a semi-retired grandfather of five living in Oakland, Calif. The son of a chainsaw importer, Williams sold the family business in the 1970s and began consulting for corporations, recalculating government economic data to arrive at what he says were more reliable measures, and with them, truer forecasts. Today Williams runs Shadow Government Statistics (ShadowStats.com) from his home. For $175 a year subscribers get economic data and analysis adjusted to back out the accumulated effects of what Williams has dubbed the Pollyanna Creep -- Pollyanna being the orphan protagonist of the 1913 children’s book who learns to play the “glad game” to find cheery perspectives on life’s sorrows. In other words, he provides figures he feels are properly miserable, to offset government ones he says are too prettied-up.

If Williams is right, unemployment is over 20%, gross domestic product is shrinking by 8% and consumer prices are jumping by nearly 7%. His forecasts border on apocalyptic. The government is creating so much new money, he says, that the all but inevitable result is hyperinflation, where “your highest denomination, the $100 bill, becomes worth more as toilet paper than money.” Buy physical gold, he advises.

Whether we believe the forecasts or not, the possibility of a Pollyanna Creep has serious implications. Social Security payments are just one benefit adjusted each year for increases in the cost of living. If the figures hadn’t been corrupted, says Williams, checks might be close to double what they are.

Williams has managed to attract plenty of press. A year ago, Harper’s magazine featured a cover drawing of a grinning Uncle Sam fondling numeral-shaped party balloons, with the headline, “Numbers Racket: Why the Economy is Worse Than We Know.” The story centered on Williams’ data. The San Francisco Chronicle followed with “Government Economic Data Misleading, He Says.” Last fall in the London Times: “Forget Short-Sellers and Manipulators, Pollyanna Creep Could Be the Culprit.”

Government statisticians are frustrated. “Economic Data Seems Accurate” doesn’t make for a catchy headline, so the press, they say, are too quick to give credence to conspiracy theories. “We go out of our way to be transparent,” says Thomas Nardone, who during 32 years at the Bureau of Labor Statistics helped implement many of the changes in calculating the unemployment rate. “We’d be remiss if we didn’t make changes,” he says. “I’ve never seen measurement changes that were politically motivated.”

Katherine Abraham served as commissioner of BLS during the Clinton administration. Commissioners, unlike the statisticians who work for them, are political appointees. Now a professor at University of Maryland, Abraham says she did see political pressure, but rarely, and never with results. Once, she says, a prominent lawmaker told her the BLS might get more funding if it would agree to propose changes that reduce the appearance of inflation. Abraham says she rebuffed the offer.

Decide for yourself. Here’s a roundup of measurement changes at the heart of Williams’ claims, along with responses from people who work closely with the measurements. I’ll focus on unemployment and inflation, but not GDP, since the chief flaw with it, according to Williams, is how problems with the inflation measure overstate real, or after-inflation, growth. (There’s a different case to be made -- that GDP measures some fairly undesirable things, like the cost of war and divorce lawyers, and so isn’t a great proxy for economic well-being -- but I’ll save that subject for another day.)

About 13 million people were unemployed during the Great Depression, or around 25% of the work force, but those are fairly recent estimates. At the time, the government simply didn’t track data like it does today, which made it difficult to judge whether things were getting better or worse. Two main developments in the 1930s made tracking unemployment feasible. The first was an improvement in the way statistics are used to turn a relatively small sample into a faithful representation of the larger population. That allowed for the use of surveys. The second was the notion of basing one’s status as part of the unemployed work force on actions. Whether someone wants to work, after all, is a subjective thing. Whether they’re looking for work is not.

Today the BLS reports six measures of unemployment, called U-1 through U-6, for which the definition of unemployment gradually broadens. For example, 4.5% of the work force has been unemployed for 15 weeks or longer and is actively looking for work (U-1), while 15.8% is unemployed if we count those who say they want work but aren’t looking, and those who work part-time for lack of full-time options (U-6).

Williams takes issue with a 1994 change that coincided with a shift to computerized data collection from pencil and paper. Until then, a discouraged worker was someone who wanted to work but had given up looking because there were no jobs. The BLS tightened the restrictions with additional questions, which reduced the ranks of discouraged workers by half. As Williams puts it, “The Clinton administration dismissed to the non-reporting netherworld about five million discouraged workers.” Add those in, he says, and unemployment approaches Great Depression levels.

Nardone, the longtime BLS economist who today serves as assistant commissioner for current employment analysis, says the 25% unemployment rate often cited for the Great Depression is based on research that corresponds with today’s U-3, the unemployment rate most commonly reported by the media. It stands at 9.4%, recall -- not close to Depression-era levels. The 1994 changes did reduce the ranks of discouraged workers, but also introduced a new category: the marginally attached, who want jobs but aren’t looking for reasons like transportation problems and child-care requirements. The most commonly watched measure (now U-3, before the change U-5) is mostly unaffected, since it doesn’t include discouraged workers. The benefit of the changes, explains Steven Haugen, a BLS economist, is a less subjective measure of discouragement, and some additional ways to judge whether the nation is not only working, but working up to its ability. Williams says the change reduced the broadest measure of unemployment in a way that “doesn’t match with public perception, and for good reason.”

The same agency that reports unemployment, the BLS, also reports the consumer price index. It tracks changes in the prices of more than 8,000 goods and services, from apples in New York to gasoline in San Francisco. There are several variants of the CPI index. For example, CPI-W weights things like fuel more heavily to better reflect the commutes of workers, and is the basis for Social Security adjustments. CPI-U, the measure most often reported in the media, includes items a typical urban consumer might buy, and determines adjustments to inflation-indexed Treasury bonds. Note that “core” inflation, which excludes food and fuel, isn’t used as the basis for any federal spending program (and isn’t called “core” by the BLS, which reports but doesn’t seem to especially prize the measure).

Most CPI criticism is based on three changes that affect all indexes. In 1983 the BLS replaced house prices with something called owners’ equivalent rent to measure the cost of shelter. Williams and other critics say it understates the cost, since house prices, until recently, had outpaced rents. John Greenlees, a BLS economist, says the new method is the most widely used among developed nations and is meant to fix a flaw in the old one. The CPI is supposed to measure things people buy to use, not things they invest in. For many people, houses are a little of both. The new measure attempts to isolate the portion of housing expenditures that best reflects the cost of living. Williams says the purchase price of housing is an important factor in determining a constant standard of living, and he doubts the ability of “the government to accurately calculate how much a person would pay to rent his own house.”

Another change: In 1999 the BLS adopted a geometric mean formula to replace its arithmetic mean one. The new method weights goods less as their prices rise, and is supposed to reflect patterns of consumer substitution. Critics say that treats consumers as if they’re no worse off when they switch to hamburger from steak. Greenlees says the analogy is flawed; the methodology allows substitution only between similar goods in the same region -- from steak in Chicago to a different type of steak in Chicago, and not to hamburger. The old measure was really an overstatement of price increases, one that assumed consumers don’t react at all to higher prices, he says. Also, the impact is relatively small. The BLS has continued to calculate prices under both methodologies and says over five years ended 2004 the new measure reduced CPI growth by 0.28 percentage points a year. Williams says geometric weighting has moved the CPI away from measuring a constant standard of living. He says that when the effects are combined with those of other changes, like increased price surveying among discount stores (which he contends offer poorer service and thus a lower standard of living than the shops they replaced) the overall impact is larger than the BLS states.

Finally, in 1999 the BLS began using what it calls hedonic adjustments. Williams explains the approach with a dash of sarcasm: “That new washing machine you bought did not cost you 20% more than it would have cost you last year, because you got an offsetting 20% increase in the pleasure you derive from pushing its new electronic control buttons instead of turning that old noisy dial.” He calls the impact on CPI “substantial.” Greenlees says the name “hedonic” was an unfortunate choice, since the technique has little to do with making judgments about pleasure. It’s designed to measure the quality difference between goods when one is discontinued and must be replaced in the index with another that’s not quite the same. Adjustments can push the index in either direction, but Greenlees says the overall impact since the change has been a tiny increase in the CPI -- about 0.005% a year. Williams says some hedonic adjustments are indeed necessary, like when the size of a box of crackers changes from 12 ounces to 10 ounces. But more theoretical adjustments, he says, “overstate the quality of what the public is buying."

The BLS has published a 17-page paper countering what it calls misconceptions about the CPI. Find it here.

Williams suspects his charges motivated the paper, and has issued a response — rebuttal to the rebuttal, if you like — here