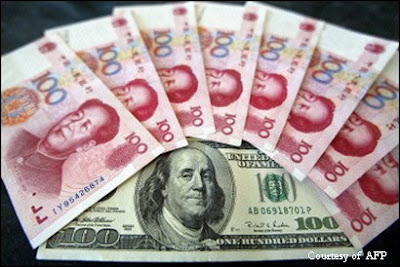 China's currency is not freely convertible but its use is spreading
China has begun a trial scheme that allows trade with its neighbours to be settled with its own currency, the yuan, also known as the renminbi.

Six Shanghai companies have signed contracts with counterparts in Hong Kong and Indonesia to settle deals in the currency.

It means if the two parties to a trade have yuan available, they need not enter world exchange markets to pay.

Executives said the move would save costs and avert exchange rate risks.

Most of China's foreign trade is settled in US dollars or the euro, leaving exporters vulnerable to exchange rate fluctuations.

The yuan is not yet a freely convertible currency.

But observers say that, when expanded, the scheme could lead to the strengthening of the Chinese currency.

"The scheme should have limited impact on the yuan's value in the initial stage, due to official restrictions and because firms need time to get familiar with the procedures," said Liu Dongliang, currency analyst at China Merchants Bank in Shenzhen.

"But with its expansion in the long run, it will increase pressure for the yuan to appreciate as the yuan's international status strengthens."

The trial is expected to be limited to Hong Kong and Macau outside of mainland China, and to Shanghai and Guandong province.

However it is expected to be extended so that the yuan could be used to settle trade between parts of eastern China (Guangdong and the Yangtze River delta) and the Asean group of countries (Brunei, Burma, Cambodia, Indonesia, Laos, Malaysia, the Philippines, Singapore, Thailand and Vietnam).

Last month, China's central bank reiterated its call for a new reserve currency to replace the US dollar.

Central bank chief Zhou Xiaochuan has loudly led calls during the financial crisis for the dollar to be replaced.

The bank report called for more regulation of the countries that issue currencies underpinning the global financial system.