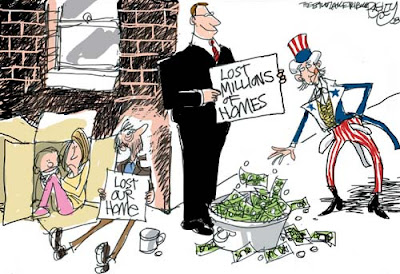 That is the main finding of the so-called "stress tests" to see if the banks have sufficient capital to cope should the recession worsen.

Bank of America is the most at risk, needing an additional $33.9bn.

"Our hope with today's actions is that banks are going to be able to get back to the business of banking," said US Treasury Secretary Timothy Geithner.

The results should go some way to lift the cloud of uncertainty that has engulfed the US banking sector by providing assurance that the sector would have the capital to handle further losses.

Other banks that need more money include Wells Fargo, which is said to require $13.7bn, and GMAC, the financial arm of General Motors, which needs $11.5bn.

Citigroup requires an additional $5.5bn of funds, and Morgan Stanley has been told to find $1.8bn.

Some of the banks have already indicated how they intend to raise the money they need by private means such as asset sales, rather than having to secure any additional government loans.

The 19 banks that were tested by Treasury Department and Federal Reserve officials account for two-thirds of the total assets of the US banking system, and more than half of the total amount of credit in the US economy.


THE 10 THAT NEED MORE CAPITAL

The banks that require extra capital have been given until 8 June to finalise their plans to do so, and get them approved by regulators.

Mr Geithner said earlier on Thursday that no US bank being screened by regulators was at risk of insolvency, comments echoed by Federal Reserve Chairman Ben Bernanke.

The treasury secretary said he believed that while the majority of the banks would be able to raise any additional money they need from private sources, if they were unable to do so the government may have to provide them with more taxpayer money.

Analysts broadly welcomed the results of the stress tests.

"It seems to be that the leaks were very accurate, so there doesn't seem to be any major surprises," said Eric Kuby of North Star Investment Management.

"The fears of nationalisation or of failure have more or less disappeared."


The stress tests have been successful as a PR exercise. Whether they will actually make the weak banks any stronger is debatable

Have the tests passed the test?

Those that do not require extra funds are Goldman Sachs, JPMorgan Chase, Bank of New York Mellon, MetLife, American Express, State Street, BB&T, US Bancorp and Capital One Financial.

Some of the banks that need extra funds have been quick to announce how they intend to do so.

Bank of America said it would raise the $33.9bn it needs through the sale of assets and other measures, while Citigroup, Morgan Stanley and Wells Fargo are to issue or exchange shares.

Citigroup chief executive Vikram Pandit said his bank's actions would "give it the financial strength to weather an adverse stress scenario".

Some commentators have questioned whether the tests have been strict enough.


WHAT WERE THE STRESS TESTS?

They measured the health of the 19 banks in question
The aim was to find out which might require more cash reserves in the event of the economic outlook worsening
Professor Nouriel Roubini and Professor Matthew Richardson of New York University said that the doomsday scenario that the banks' books have been subjected to is actually no worse than the current economic situation.

And as such, they said "the stress test results will not be credibly interpreted as a sign of of bank health".

Others say that the tests do not take account of the banks' varying business models.

SOURCE: BBC NEWS
Posted by nickglais at 2:17 AM