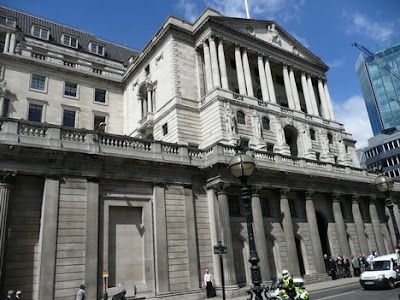 The Bank has cut its growth forecast over the next two years and raised its estimate for inflation since February.

It appears to be gloomier than the government, which has forecast a decline in GDP of about 3.5% this year.

The Bank is also more pessimistic about how quickly growth will recover to normal levels, but says there is more uncertainty than usual in its forecast.

The Bank has not provided a single forecast for economic growth, but its central projection appears to be for a decline of about 3.9% this year and growth of about 1% in 2010.

Jonathan Loynes, an economist at Capital Economics, said that Bank of England had injected "a sensible element of caution amidst recent excited talk of the green shoots of recovery".

"This appears at least partly to reflect a gloomier view on the outlook for bank lending," he said.

The bank's gloomy outlook hurt sterling, which fell to $1.5180 against the dollar from $1.5315 before the report was released.

Bank of England Governor Mervyn King said that the economy would take time to heal.

"But in the light of the state of balance sheets particularly in the financial sector, the committee judges that the risks are weighted towards a relatively slow and protracted recovery."

Mr King said he saw some reasons for optimism and the pace of economic decline had moderated.

He also said that government plans to stimulate the economy and the weak pound would help.

But he was also cautious and said problems in the banking sector had not yet been fully resolved.

The Bank forecast that inflation should fall to around 0.5% by the end of this year before picking up to around 1.2% in two years' time - below the Bank's target rate of 2%.

Mr King said that said it was too early to ascertain whether the Bank's new policy of quantitative easing was successful but said he had not been disappointed by its effects.

With interest rates as low as they can go, the Bank has been pumping money into the banking system through quantitative easing to stimulate the economy. 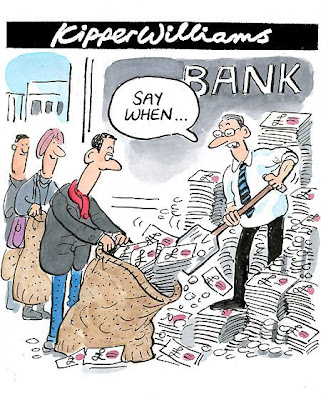 "It will take 6-9 months I think before we see more evidence," Mr King said.

Analysts said the inflation report indicated that the Bank's interest rates would likely remain at 0.5% until well into 2010.

"We certainly suspect that while latest data and survey evidence have been markedly improved and even hint that the economy could be close to stabilising, significant relapses remain highly likely," said Howard Archer, economist at Global Insight

BBC News
Posted by nickglais at 8:56 AM