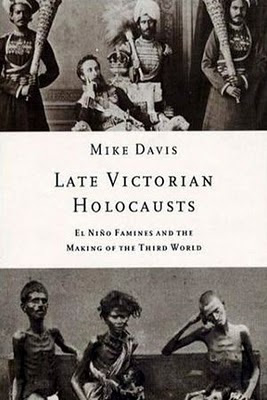 Critics of globalization point out with some justice that poor people around the world suffer far more than the citizens of industrialized nations during downturns in the global economy. Peasants in developing countries can find their lives hanging in the balance during a rise in food prices or a decline in the global market value of the goods they produce. Never was this more true than during the hey-day of the European imperialism in the last three decades of the nineteenth century. Aggressive trade practices and the ruthless use of military force effectively subdued nations in Asia, Africa, and South America and brought these countries into a global trade system. By the 1870s, and certainly by the turn of the century, many European countries, above all Great Britain, had created the world's first global market economy. Financial markets in London, Paris, Amsterdam, and elsewhere were linked by telegraph to places where raw materials were produced for European consumption, while established trade routes were patrolled by European navies (particularly the Royal Navy). The economic power of the extensive British Empire was unparalleled and the inner workings of the global system dominated by London determined the fate of innumerable people around the world.

It is with the workings of the British economic system and their impact on indigenous populations in India, China, and elsewhere that Mike Davis' book Late Victorian Holocausts is concerned. Davis' point of departure is a simple question. Why is it that widespread hunger in Western Europe disappeared in the nineteenth century while famine and disease raged throughout multiple places in what we would call today the "Third World"? Davis provides a simple answer: European imperialism (especially British imperialism) created a global economic system through which the food and wealth of conquered nations (i.e. colonies) was siphoned off for the benefit of wealthy and powerful Europeans, while those in the colonies were left to starve and die. The result was mass death (what Davis calls "holocausts") on an unprecedented scale in India, China, Brazil and other places, that was most intense during the El Niño drought years of 1876-77 and 1888-1902.

This imperial global economic system was certainly not a "free" market in any sense of the word. It was in fact bolstered by a long series of tariffs and unfavorable trade relationships that were forced by Europeans upon the peoples they conquered. Colonies were in turn subjected to economic pressure dictated by and manipulated from financial centers in Western Europe. It was these economic forces, as well as brutal gunboat diplomacy, that Davis argues created the Third World as we know it today.

THE "FREE MARKET" AS A MECHANISM OF MASS MURDER

Davis' primary focus in fleshing out his story is the crown jewel of Britain's colonial empire: India. Drought was the precipitating cause of the hardship faced by the Indian people. However, Davis demonstrates with statistics and anecdotes that it was the unregulated "free market" system imposed on India by Britain that led to the deaths of tens of millions in the mid-1870s and late 1880s.

How did death and human suffering on such a massive scale happen? Following the English conquest of India in the early nineteenth century, economic relationships in the sub-continent underwent revolutionary changes. Thousands of miles of railroad track were laid. Telegraph wire was strung between outlying areas and the capitol city of Bombay (Mumbai today). Central grain collection depots were created and Indian grain was exported in massive quantities to the British Isles. Also, Indian subsistence farmers were gradually forced out in favor of large land enclosures. Within these new enclosures cash crops like cotton were planted, which supplied the textile mills of Lancashire, but which could not feed the Indian peasants who farmed the land. Finally, the tax burden upon the Indian peasantry was increased exorbitantly to pay for these "improvements". British authorities needed the revenue to finance war in neighboring Afghanistan.

The innovations imposed by the British on India re-directed the trajectory of Indian commerce and especially food production toward Great Britain and away from the local village markets where the food was needed. Rail lines and the adjacent grain depots enabled British authorities to stockpile grain and keep it under guard away from the people who needed it most, while telegraph lines dictated the price of grain on world commodities markets to local producers. When grain prices rose across the board in global trading, peasants could not afford to buy food.

In the face of these crippling economic forces, British colonial authorities did nothing, primarily because they would not "tamper" with the operation of the liberal "free" market that Britain had created. The Viceroy of India during the famine years of the 1870s was Lord Lytton, a mentally unbalanced English noble. Davis recounts that in the midst of widespread famine and the deaths of millions all around him, Lytton maintained a strict laissez-faire attitude toward famine relief. As Lytton wrote at the time, "there is to be no interference of any kind on the part of the Government with the object of reducing the price of food," a policy proposal Lytton termed "humanitarian hysterics" and "cheap sentiment". (p. 31)

Lytton and his fellow administrators preferred instead to blame the "laziness" of famine victims themselves for causing their own dire fate. Citing Lord Temple, "Nor will; many be inclined to grieve much for the fate which they brought upon themselves, and which terminated lives of idleness and too often of crime". (p. 41) The task of saving life, therefore, was "beyond our power to undertake," claimed Temple and Lytton, and it was "a mistake to spend so much money to save a lot of black fellows". (p. 37)

British officials were thus completely unwilling to intervene in the operation of the "free" market despite seeing death on a massive scale all around them. Overall at least 7.1 million people, and perhaps as many as 10.3 million people, died during the famine years of 1876-1878. (p. 111) Furthermore, despite death on this scale and falling production caused by drought, British officials in India still managed to export 6.4 million cwt. of wheat to Great Britain. (p. 31)

The years following 1879 were a time when the world market continued to expand. Monsoonal rains settled back into a normal pattern and grain production around the world rose considerably. These were also years when Britain and other colonial powers expanded their reach into the interior of the subjugated countries they held. In India, even more land is brought under cultivation. These lands are then connected to the market by expanded telegraph and rail lines. Then in 1888-89 and 1891-92, the bottom again fell out of the system as El Niño drought gripped the temperate regions of Asia once more.

The resulting death from famine and disease, caused by the very same factors operating in India and elsewhere in the 1870s, was unfathomably huge. By 1902 in India alone between 12.2 and 29.3 million people perished. In China, where the British, Americans, and other European powers controlled practically all trade using military force, between 19.5 and 30 million people died. In Brazil another 2 million perished over the same time span. (p. 7).

THE "FREE" MARKET AND THE MAKING OF THE THIRD WORLD

Mike Davis demonstrates beyond a doubt that the economic structure of exploitative globalization is not a new phenomenon in the world. The lives of millions of people who formerly had survived in localized economies based on subsistence farming were wiped out "in the process of being forcibly incorporated" into the modern world system. (p. 9) Davis reminds us that markets are never free and they never operate according to "iron laws" of economics. Rather, markets are created and often the power underpinning their operation is fiscal manipulation and simple brute force.

Great Britain's global imperial economy was a case in point. It was never a "free" market. England imposed unfavorable trade terms and high tariff walls on India, China and on all of the other countries in its empire. Local economies forced open by the British were sucked dry of their vital raw materials and in return peasants were forced to buy expensive British manufactured goods. This practice was put into place throughout the colonial world by France, Portugal, Spain, Germany and other colonial powers. If anything, the economies of European colonies were more captive markets than free markets.

The latter point is perhaps the most important conclusion of Late Victorian Holocausts; specifically, that what we call the Third World today was a product of European and, to a lesser extent, American economic exploitation. The incorporation of formerly powerful countries like China and India into the global economy by Great Britain and others effectively destroyed indigenous production. Contrary to conventional wisdom, until around 1850, India and China had actually held their own against Europeans when it came to industrial production. The localized production of wealth and industry, however, was halted and then reversed by the imposition of the global economic system. It is for this reason, Davis concludes, that India's per capita income did not increase between 1757 and 1947; and in fact declined by more than 50% between 1850 and 1900. (p. 311).
Posted by nickglais at 1:24 PM

Hello .. I have never seen a smart articles that you created. It really helped me to get back my ideas for writing. I will save this post, for I learn