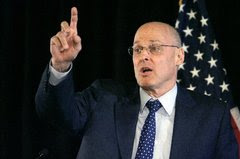 Democracy Now's Amy Goodman interviews Naomi Klein about Henry Paulson and the current Economic Crisis here is her reply. We would like to point out in our Democracy and Class Struggle view of the crisis we pointed Paulson's similarities with Andrew Mellon and the great Depression of the 1930's.

NAOMI KLEIN: You know, Amy, I don’t think we can stress this enough. Henry Paulson is one of the key people, the top people, responsible for creating the crisis that he is now claiming he will solve, you know, and this is—if we think about the 9/11 analogy and, you know, the state of shock that Americans were in after 9/11 and the emergence of Rudy Giuliani as the savior—and, you know, people have so much regret about that. And in the book, I write about this as the state of regression that we go into when we’re frightened. And I think Henry Paulson has really been cast in this role as an economic Rudy Giuliani, saving the day, impartial, bipartisan, a strong leader.


I found this article in BusinessWeek that ran when Paulson was appointed to the Treasury, and I just want to read you one sentence, because I think it’s all we need to know about Henry Paulson. This is from BusinessWeek, when he got the appointment as Treasury Secretary in 2006. The headline of the article is “Mr. Risk Goes to Washington.” It says, “Think of Paulson as Mr. Risk. He’s one of the key architects of a more daring Wall Street, where securities firms are taking greater and greater chances in [their] pursuit of profits. By some key measures, the securities industry is more leveraged now than it was at the height of the 1990s boom.”


Then it goes on to say that when Paulson took over Goldman Sachs in 1999, they had $20 billion in debts. When he—in these high-risk gambles. When he left, they had $100 billion, which means he took their risk level from $20 billion to $100 billion. So it is absolutely no exaggeration to say that Henry Paulson, far from speaking for Main Street, is actually bailing out his colleagues for some of the very debts that he himself accumulated. This is an extraordinary conflict of interest.
Posted by nickglais at 12:39 PM