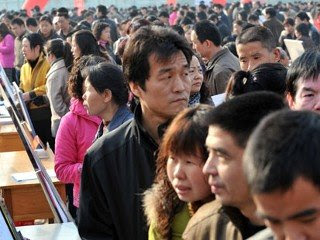 By Chris Buckley (extract from report)

BEIJING (Reuters) - China faces surging protests and riots in 2009 as rising unemployment stokes discontent, a state-run magazine said in a blunt warning of the hazards to Communist Party control from a sharp economic downturn.

"In 2009, Chinese society may face even more conflicts and clashes that will test even more the governing abilities of all levels of the Party and government."
President Hu Jintao has vowed to make China a "harmonious society," but his promise is being tested by rising tension over shrinking jobs and incomes, as well as long-standing anger over corruption and land seizures.

China also faces a year of politically tense anniversaries, especially the 20th year since the June 1989 crackdown on pro-democracy protesters in Tiananmen Square. That date has already galvanised the "Charter 08" campaign by dissidents and advocates demanding deep democratic reforms.

While foreign commentary about risks to China's recipe of fast economic growth and one-party control are common, the nation's leaders are usually reticent about such threats.

This report and other recent open warnings may be intended to help snap officials to attention, said one Chinese expert.
Posted by nickglais at 11:56 AM