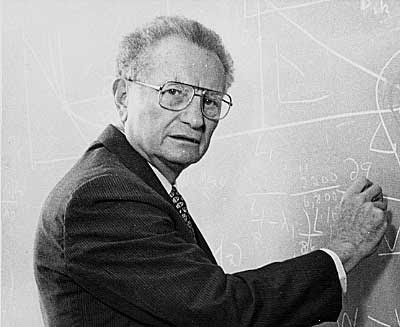 Re. the following from your column in today's Washington Post:

In [a certain] respect, at least, Obama is rather like Franklin D. Roosevelt, who dismissed the conservative economic doctrines of the 1920s. “We must lay hold of the fact that economic laws are not made by nature,” Roosevelt said, directly countering the central premise of orthodox economics. “They are made by human beings.”

I. In the opening section of a recent paper on Iceland ’s economic collapse I traced the precise source of this "central premise of orthodox economics" to Paul A. Samuelson’s Ph. D. thesis at Harvard in 1942:

The disaster which befell the national economy in early October had long been foreseeable. It reflected the collapse of the business model of the Icelandic commercial banks following their privatization, on the one hand, and the inadequacy of the concurrent economic policies of the government, on the other hand. The business and economic policy practices involved were not specifically Icelandic but mirrored the ideological prescriptions of which former Chairman of the US Federal Reserve Board Alan Greenspan, spoke before a congressional committee two weeks later as follows: "Those of us who have looked to the self-interest of lending institutions to protect shareholders' equity, myself included, are in a state of shocked disbelief.” As for the presupposition of all mainstream economics that automatic corrective forces ensure financial market equilibrium, Greenspan said: “The whole intellectual edifice collapsed in the summer of last year.”

“I made a mistake in presuming that the self-interests of organizations, specifically banks and others, were such as that they were best capable of protecting their own shareholders and their equity in the firms,” Greenspan confessed. “I have found a flaw. I don’t know how significant or permanent it is. But I have been very distressed by that fact.” The committee chairman sought clarification of the matter: “In other words, you found that your view of the world, your ideology, was not right, it was not working,” “Absolutely, precisely,” Greenspan replied. “You know, that’s precisely the reason I was shocked, because I have been going for 40 years or more with very considerable evidence that it was working exceptionally well.”

Greenspan’s ideology is labeled The Washington Consensus because it has shaped the views of the principal institutions in the field of monetary and economic issues in Washington D.C. , including the International Monetary Fund (IMF). In the wake of the privatization of the banking system, the Central Bank of Iceland, the Ministry of Finance and the Financial Supervisory Authority were guided by Greenspan’s ideology. And they were not alone in this for as John Maynard Keynes, the foremost economist of the last century, observed, “The ideas of economists and political philosophers, both when they are right and when they are wrong, are more powerful than is commonly understood. Indeed the world is ruled by little else. Practical men ... are usually the slaves of some defunct economist.”

Keynes wrote this at the end of his best-known work, General Theory (1936), but in a preface to Tract on Monetary Reform (1924, a book dedicated “without permission” to the Bank of England’s Court of Directors ) he had expressed his disagreement with the view that bankers could not understand the business of banking. Instead, the problem was – and, as indicated by Greenspan's ”shocked disbelief”, still remains – that theoretical economists have not had anything sensible to say on the subject matter. Since 1976, as it happens, this writer has repeatedly drawn attention to the flaw which shocked Greenspan 32 years later. At the time I was doing research in connection with a Ph. D. thesis at Harvard University while working as an economist at the IMF. My drawing attention to the flaw was not well received, to put it mildly. My adviser, the Chairman of the Harvard Economics Department, chose to withdraw from that role and colleagues at the IMF were not amused for, as a very senior official put it: “Mr Tómasson thinks he is right and the world is wrong.”

Four weeks before Greenspan’s appearance before the committee, Fréttablaðið published an article by me on the flaw in question (‘Crisis in economics’, Sept. 25). Since it addresses the root cause of ongoing problems in world monetary and economic affairs as well as that of Iceland ’s economic disaster, my article’s key point bears repeating now:

The flaw resides in an innocent-looking hypothesis which Paul A. Samuelson advanced in a 1942 Ph. D. thesis at Harvard expressly for the purpose of paving the way for use of algebra and calculus in the analysis of theoretical economic models. It reads as follows: A market economy is a “system in 'stable’ equilibrium or motion”. Embedded here is the idea that any incipient displacement of the conditions of market equilibrium triggers offsetting corrective reactions by the forces which drive the market system along its path of dynamic equilibrium. This notion is borrowed from Newtonian mechanics in which gravity is held to steer the path of all material particles in the universe.

Samuelson’s hypothesis is no worse than much else which academic scholars can imagine and it was benign while ensconced within academe’s ivory tower. Also, it is fair surmise that the hypothesis would not have passed muster had it occurred to anyone that it would be taken seriously by the world’s monetary authorities after 1970. For it implies that national and world monetary equilibrium is certain to be ensured if the world's governments and central banks step aside to make way for the equilibrium which the hypothesis holds to reside in market forces. Now that many national monetary systems and that of the world as a whole are in turmoil, it can no longer be denied that the hypothesis is counter-factual.

Indeed, it is self-evident that ’laws of nature’ differ from regulations established by national and international authorities in light of their best judgment at any given time. Still, Iceland’s Minister of Finance viewed government intervention in the decision-making of the country’s banks as ill-advised because they were operated by experts. Iceland ’s monetary authorities may not have heard of Samuelson's hypothesis, yet it is reflected in their worldview.

II. I commented on the dire real-world implications of this “central premise of orthodox economics” in a Letter to the Editor of the Washington Post on September 20, 2008 as follows:

Your Sept. 20 editorial ('Day of Reckoning') refers to "greedy Wall Street executives and the inattentive Washington regulators who enabled them to build what we now know was a financial house of cards.”

As a former senior IMF staff member (1966-1989) and critic of mainstream economics and The Washington Consensus, I have long viewed post-Bretton Woods world monetary arrangements as fatally flawed. In this respect, John Maynard Keynes cautioned: “Soon or late, it is ideas, not vested interests, which are dangerous for good or evil."
One such idea is Paul A. Samuelson's “hypothesis that [a real-world market] system is in “stable” equilibrium or motion.” (Foundations of Economics, p. 5) For, when applied to policy-making, it implies that monetary stability is best served by the IMF, governments, and regulatory institutions getting out of the way of self-correcting market forces.
In fact, it is not rocket science to figure out that an ever-increasing ratio of world paper 'wealth' to real output is unsustainable. But, once the inevitable happens, those in authority will feign surprise and assert it could not have been forseen. In late 1996, therefore, I advised Fed Governor Laurence Meyer, inter alia, as follows:
“It is fair surmise that macro-economic forecasting models predicated on mainstream monetary thought, which have detected no signs of a global crisis during the rapid rise in the ratio of paper wealth to real output during the past quarter century, are once again setting policy-makers up for a nasty “surprise”.”
Also, in early 1997 I wrote to Professor Patrick Minford, economic adviser to Margaret Thatcher, concluding with respect to post-Bretton Woods world monetary arrangements that “[This] house of cards is certain to come crashing down."
III. A refresher economics course for President Obama’s brilliant economic team is in order.

Chairman Ben S. Bernanke, We Are on Our Way to Abolish Credit.

All of Our Economic Problems Find They Root in the Existence of Credit.

Both Dynamic on the Short Run & Stable on the Long Run.

I Propose, Hence, to Lead for You an Exit Out of Credit:

Let me outline for you my proposed strategy:

✔ The Property Title: Cast Your Vote to Abolish Credit.

✔ The Credit Free Money: The Dinar Shekel AKA The DaSh, Symbol: - .

✔ A Specific Application of Employment Interest and Money.
[A Tract Intended For my Fellows Economists].


If Risk Free Interest Rates Are at 0.00% Doesn't That Mean That Credit is Worthless?

Since credit based currencies are managed by setting interest rates, on which all control has been lost, are they managed anymore?

In This Age of Turbulence The People Want an Exit Out of Credit: An Adventure in a New World Economic Order.

The other option would be to wait till most of the productive assets of the economy get physically destroyed either by war or by rust.

It will be either awfully deadly or dramatically long.

A price none of us can afford to pay.

“The current crisis can be overcome only by developing a sense of common purpose.
The alternative to a new international order is chaos.”


Let me provide you with a link to my press release for my open letter to you:


I am, Mr Chairman, Yours Sincerely,