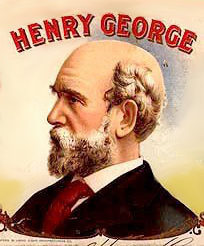 Marx proves here that he is simply a defender of the land monopoly of the elites. And elitist shill, advocating for the destruction of the middle classes in order to preserve the status of the top 0.1%

Rent Interest and Profit are surplus value - Henry George could not see that - Marx could - Henry George saw the Landlord as the problem not the Landlord the Banker and Capitalist as a systemic whole - has Marx did. Henry George's politics died a long time ago and find ressurrection in last ditch attempt to attack Marxism from a rightist pretending to be a leftist - wolf in sheeps clothing and intellectual charlattanism !!!