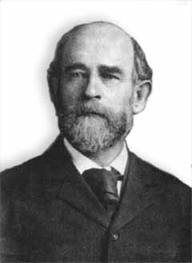 Henry George (September 2, 1839 – October 29, 1897) was an American writer, politician and political economist ,who was the most influential proponent of the Land Value Tax.
Henry George in his book Progress and Poverty tries to marry the interests of the working class with that of the capitalist class against landowners.

Henry George was an advocate of the free market and free trade against any form of protectionism. He believed in removing taxes from Labour and Capital and placing the burden of tax on landowners.

However whilst most Georgists are self confessed right wingers some on the Left like the Green Party in the UK have also adopted Georgist ideas.

The object of Land Value Taxation is to ensure that the rent attributable to the natural value of the land , and to the value created by its fortunate location, is paid to society as a whole and not to individual landowners.

Whilst the Land Value Taxation ostensible target is the absentee landowner or speculators, LVT would also fall on every landowner however small and they would be under pressure to extract as much profit from their land as possible to pay the tax.

In a capitalist society such pressures would bring undesireable results like ecologically unsound exploitation of forests , peat bogs etc. Also low value properties with a larger acreage than high value properties would suffer from this tax.

Land Value Taxation in Urban areas would lead landlords to evicting tenants in persuit of profit and the elimination of low cost urban "Land withheld from use".

There have discussions about a special urban land tax in UK , to stop land speculation, rather than a universal land tax which would be equitable, but it appears to have been abandoned by its proposers as "unworkable" in the UK.

In broader political terms shifting the burden of taxation onto just the landlord and rent diverts the working class from redistributing the other elements of the economic surplus like interest and profit from the capitalist class.

Henry George was not short on employing racist rhetoric against Chinese workers in USA.

This free market racism from Georgism stays with us to this day which is why we describe Henry George as a wolf in sheeps clothing.

Interest rates by Banking capitalists and profit by Corporates are ring fenced for tax protection by Georgists who do not regard interest on capital or corporate profits as part of the economic surplus like Marxists.

Transaction taxes to reduce Financial market speculation are opposed by Georgeists has would any profits tax on corporates, this exposes the free market fundamentalism of Georgeism who Marx characterised as a "last ditch" defender of free market capitalism.

The new manifestation of Georgeism during the current economic crisis has social roots in the bourgeoisie and is the last ditch ideological defence of capitalism - it also exposes the bourgeois ideological class character of the "Greens" that have embraced Georgism.
Posted by nickglais at 4:41 AM

A land value tax would not fall more on high acreage low value land than low acreage high value land. It's a land value tax, not a land acreage tax, duh. Whatever the market bears.

Everything in this article is an outright lie, intentionally dishonest, and the following quote show that the author did not even understand the very basic nature of LVT and what its results would be:

Whoever wrote this has no idea about George and has never read him. I spoke to the author, who lied and said he was familiar, but he could not explain anything about George's ideas. Reading this article, it almost seems as though the author struggled to make each line as dishonest as possible.

These comments expose the Marxist movement for what it is: Feudalism in Sheep's Clothing. It defends the Landed Gentry at evey turn. If it wanted true equality it would recognise the legitimacy of the commons. Instead it pits capital against labour and ignores the common wealth of land and its resources. Elite Divide and Rule. Intellectual Psychopaths love this kind of thing. One member of the Rockerfeller dynasty said "I need Workers not Thinkers".
Marxism is based on destruction of creativity by destroying the thinking body of people eutside of the elite in a society. Just like feudalism: A truly psychopathic creed.

I least I have Read Progress and Poverty which many Greens have not and recognize a defense of capitalist profit when read it - a lot of myths about Henry George circulate on the Left but read a real socialist like William Morris on Henry George and you will get the message that we are dealing with a wolf in sheeps clothing.

Thanks for your comments they just validate that I have hit home to produce such an irrational response defending an "anti capitalist " Henry George that does not exist.