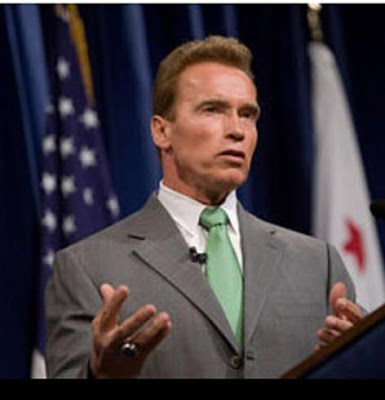 Here is an extract of an article by Chris Ayres the Los Angeles Correspondent for The Times after years on the brink, it has finally come to this: California is going out of business.

"How did this happen? Sure, the economy is bad. But this is a state whose money comes from the most bankable economic assets on Earth - the Long Beach ports, the Central Valley agricultural region, the defence contractors out in the Mojave desert, Silicon Valley, Napa Valley... Hollywood. How do you tax all this and end up amassing debts at the present rate of $1.7 million per hour?

Perhaps it has something to do with the man running the place. And I am ashamed to say that, yes, when the actor most famous for playing a killer robot in a so-so B-movie ran for governor, I was behind him. I defended his fiscally conservative, socially moderate agenda and loveable tendency to work movie tag lines into important policy debates. I believed in Governor Arnold Schwarzenegger, the “governator”. And like the five million Californians who voted for him, I'm feeling a bit silly now.

It was all talk in the end. For all Mr Schwarzenegger's swagger, he didn't have the faintest idea how to run a state that is at the mercy of laws put on the books at every election by the voters themselves, through a system of utter madness known as “direct democracy” (imagine, if you will, an army in which the troops can overrule the general, mid-battle, with a show of hands).

Still, nothing justifies the fact that Mr Schwarzenegger - who once railed against “economic girlie men” - has allowed California's budget to grow by 40 per cent to a morbidly obese $144 billion since 2004, setting the stage for a calamity of asteroid-hitting-the-Pacific proportions the moment tax revenues began to fall.

The governor wants to raise taxes - exactly the same thing that his predecessor tried to do before being terminated by a certain Hollywood action star - while his fellow Republicans are objecting, without suggesting anything cleverer. Until a solution is found, California is done, dead, kaput. It is, as John Cleese might have put it, an ex-state. In the meantime, I suggest we put Mr Schwarzenegger on an aircraft, fly him back to Austria and ask politely for a refund."
Posted by nickglais at 2:07 PM