China's economy expanded by just 6.8 percent in the final quarter 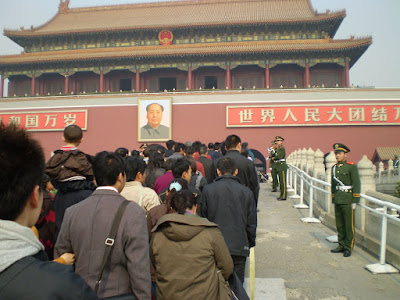 China's economy expanded by just 6.8 percent in the final quarter, pulling the full-year growth figure down to 9.0 percent, the National Bureau of Statistics reported last month.

Coming after 13.0 percent growth in 2007, the figures offered the most complete picture yet of just how severely the world crisis has hit China's export-dependent economy.

More than 20 million migrant workers, the engine of the nation's economy, have already lost their jobs due to the turndown.

Source AFP
Posted by nickglais at 5:03 AM

Comrade, have you come across any Leninist analysis of the Chinese export of capital? I'm trying to find the right balance between a lifetime of promoting friendship and understanding between the peoples of Australia and China, on the one hand, and a lifetime of fighting against the foreign ownership and control of Australia's natural resources, on the other. Mutually beneficial trade and investment between nations that respect and honour each other's independence I don't have an argument with, but buying into resources companies to force commodity prices down or coming into conflict with Aussie unions is another matter. If you come across anything, can you put it up here?