The Chinese Economy - another view

China's economic growth rate has fallen for the third quarter in succession, amid fears that the economy could be heading for a severe downturn.

The National Bureau of Statistics said the economy had grown at a rate of 9% in the three months to September - down from 10.1% over the previous quarter.

"The growth rate of the world economy has slowed down noticeably. There are more uncertain and volatile factors in the international economic climate," he said. "All these factors have started to release their negative impact on China's economy." 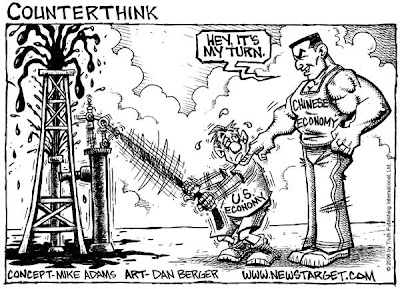 Many claim that Chinese domestic consumption will take up the slack due to export slowdown. This is unrealistic. As Walker of Asianomics points out, the UK alone consumes more than China and India combined.

China’s economy has been driven by investment and exports, not by domestic consumption. In fact, consumption in China has failed to keep pace with economic growth, which is why the trade surplus has continued rising.

There’s another problem. The credit boom has finally erupted in widespread inflation. The costs of commodities and wages of semi-skilled workers have been soaring. This leaves authorities with little choice but to tighten monetary policy into a slowdown.

After falling for years, Chinese export prices to the US have started to climb. The combination of rising inflation and the revaluation of the renminbi against the dollar means that China in some sectors is losing its position as the world’s low-cost producer.

But a sharp economic slowdown will dampen the demand for commodities and bring more bad news to Shanghai’s beleaguered stock market. It also makes a revaluation of the renminbi less certain.

As economist Andrew Hunt points out, the Chinese business cycle normally ends in devaluations, not revaluations, of the currency. Yet in April some $50 billion (Rs2.16 trillion) of hot money entered China in the belief that a revaluation was a sure bet. It’s difficult to think of a better way for Beijing to punish noisome speculators than by frustrating such expectations

Plus news reports on China from National Bureau of Statistics
Posted by nickglais at 2:24 AM