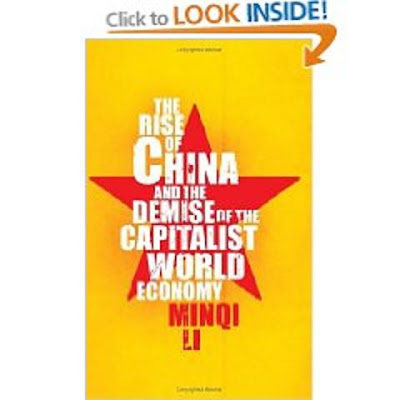 A Meeting in Utrecht on the 21st of October by Professor Pau yu Ching and another in London on the 23rd October by Nickglais address the question of the social character of contemporary China. Both speeches are posted here below.

October 2008 also sees the publication of Professor Minqi Li's new pathbreaking book about the Rise of China and the demise of the Capitalist World Economy published by Pluto Books.

Professor Minqi Li deepens the Marxist Leninist Maoist analysis of global capitalism and China's role in the world economy has the global crisis of capitalism unfolds before our eyes.

Today we have the spectacle of the Chinese Premier Wen Jiabao in Beijing saying financial innovation needs to be balanced with regulation and acting as a saviour of Global capitalism.

We at Democracy and Class Struggle place our trust and confidence in the Chinese working class and peasantry and not the capitalist elite in China who are joined at the hip to global capitalism to renew the struggle for socialism in the 21st Century after absorbing the lessons of 20th century defeats.

Deepen your knowledge of Marxism Leninism Maoism by reading the two contributions below and buying Professor Minqi Li's new book this month.
Posted by nickglais at 7:11 AM