Eastern Europe on the brink of mimicking 1997 Asian crisis 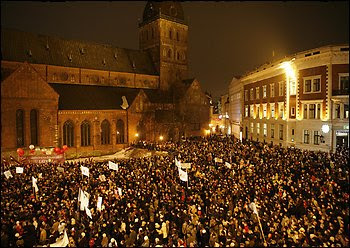 Prospects are bleak unless there is a rapid turnaround in global demand and production shifts to eastern Europe. But how committed is the West to free trade?
By Larry Elliott
THE GUARDIAN , LONDON
Thursday, Mar 05, 2009, Page 9

There are two types of global economic crisis: the ones that start on the periphery and worm their way inwards and those that erupt at the core and spread outwards. The first is more common, the second more dangerous.

Throughout the 1990s and early years of this decade, there were plenty of scares in emerging markets. Mexico was the first country to see a run on its currency and provided the template for the Asian crisis of 1997, the Russian debt default of 1998 and the collapse of Argentina in the late 2000.

As some of us said at the time, these emerging crises were warnings of trouble ahead. The global economy was akin to a middle-aged man getting pains in the chest. Despite being told by the doctor that he is eating, drinking and smoking too much, the man enjoys his life of excess and carries on regardless. In the end he suffers a massive heart attack.

Failing to heed the warnings has resulted in the second sort of crisis — and from this there is no hiding place. That was certainly the case in 1929 to 1932 — the only other occasion when economic trouble spread from core to periphery — and it is most certainly the experience of the emerging world today.

But nowhere has the impact of the global crisis been felt harder than in eastern Europe. The World Bank, the European Investment Bank and the European Bank for Reconstruction and Development announced last Friday that they would provide about 25 billion euros (US$31.3 billion) for central and eastern Europe over the next two years, but much more will be needed.

In the old Iron Curtain countries an economic catastrophe is unfolding. Russia’s reliance on exports of oil and gas has been brutally exposed by the global downturn; industrial production is falling at a double-digit annual rate and, despite intense recessionary pressures, interest rates have been raised in order to keep the ruble within its band against the dollar-euro currency basket.

In neighboring Ukraine, things are even worse. Industrial production was more than a third lower in January than a year earlier; spending in the shops has collapsed; overnight interest rates are at around 50 percent; the IMF has withheld the second tranche of a loan because the government in Kiev is failing to balance its budget. The prospect of a debt default triggering collapses around the region is acute.

In Bulgaria and Romania, foreign-owned factories providing low-cost goods have been shut. Their currencies are under severe pressure and interest rates are crippling. Expect IMF involvement within weeks.

The Baltic states have suffered a double whammy; their access to western capital has been denied by the credit crunch and their main export markets — Russia and the eurozone — are struggling. Latvia and Estonia are seeing their economies contract at an annual rate approaching 10 percent.

Financial markets in Hungary have taken a severe battering in recent weeks. This was a country that took advantage of global capital markets to fund mortgages denominated in foreign currencies. The problem with foreign-currency home loans is that payments shoot up when the local currency depreciates. Such has been the fate of the forint as overseas investors fretted about Hungary’s huge current account deficit.

Slovakia’s euro membership has meant it has escaped the worst of the financial turmoil, but it has been hit hard by the collapse in global demand for manufactured goods. Many carmakers switched production to Slovakia over the past 15 years, now Volkswagen has suspended production and Kia has cut working hours by 25 percent.

And so it goes on. The Polish zioty has fallen sharply; industrial production in the Czech Republic has collapsed; Turkey has slashed interest rates after news that car production is down 60 percent on a year ago. The central banks of Hungary, Poland, Romania and the Czech Republic issued a joint statement last week saying that they were willing to intervene to defend their currencies.

Eastern Europe is now on the brink of having its own version of the 1997 Asian crisis, and its prospects are bleak unless there is a rapid turnaround in global demand. However, that looks a remote prospect given the latest data from the US, China, Japan and Germany.

There are a couple of rays of hope. One is that the savage falls in industrial production in every continent are part of a global stock clearing exercise and that once this process is over, firms will need to start expanding output even to meet lower levels of demand.

Labor is cheap in central and eastern Europe, so it is possible that multinational companies — seeking to save money and boost profits as they come out of the downturn — will shift production to Poland, Slovakia and Bulgaria. This, though, would not be as easy as it sounds. Taxpayers in rich countries in western Europe and North America have just spent a fortune bailing out utterly useless bankers, and do not expect to be repaid by seeing their jobs exported to other countries. In the early 1990s, Russia and its former satellites were the laboratory mice for an experiment in fast-track capitalism; now they will provide a test of just how committed rich nations are to the fight against protectionism.

The assumption is that French President Nicolas Sarkozy is playing a lone hand when he insists that he expects government assistance for the French car industry to save jobs in France rather in Slovakia. But a combination of welfare for Wall Street and rapidly rising unemployment suggests a tough environment for those who insist that the world must not turn its back on free trade.

For the EU, the problems of the former communist bloc would have presented a real challenge in the best of times. But these are not the best of times. The richer countries of western Europe are going to have dig deep to help out their less well-off neighbors to the east at a time when Germany, France, Italy and Spain are all in recession, Ireland is in the grips of a housing crash, there have been riots on the streets of Greece. Just to cap things off, Austria’s banks are loaded up with dodgy loans to eastern Europe.

All this will provide the first real test of the eurozone. There are already some who believe that the strains on the euro mean that one or more countries — Italy and Greece being the usual suspects — will choose to leave the single currency.

That still looks improbable, though it has to be said that many improbable things — nationalization of large chunks of the UK banking system, for example — have happened in the past 18 months. What is certain is that a broader euro is also a weaker euro. It looks like a cast-iron sell.
Posted by nickglais at 12:12 PM