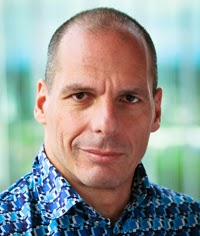 Political Economy Research sends Yanis Varoufakis our best wishes and supports the Greek People in their fightback against austerity.

We do not underestimate the difficulties ahead.

We are all Greeks Now


Yanis Varoufakis, 53, is known for his running commentary on the financial crisis in a series of blogposts that have won him thousands of Twitter followers and the respect of Syriza’s leadership.

John Maynard Keynes with a hint of Karl Marx is how one analyst described the self-proclaimed “accidental economist” who is now to become Greece’s finance minister and a key negotiator with its international creditors.

With a typically literary flourish, he celebrated his party’s victory by paraphrasing Welsh poet Dylan Thomas.

“Greek democracy today chose to stop going gently into the night. Greek democracy resolved to rage against the dying of the light,” the Greek-Australian wrote on his blog.

One of the first two ministers to be confirmed by prime minister Alexis Tsipras, Varoufakis studied at Essex University and has taught in Australia, Greece and the United States. In pre-election interviews he vowed to destroy Greek oligarchs, end what he called the humanitarian crisis in Greece and renegotiate the country’s debt mountain.

“We are going to destroy the basis upon which they have built for decade after decade a system, a network that viciously sucks the energy and the economic power from everybody else in society,” he told Britain’s Channel 4 television.

But the muted market reaction to Syriza’s decisive win was at least in part because investors expect the thoughtful powerbroker to adopt a more emollient style ahead of tough negotiations.

Writing before the election, Paolo Pizzoli, senior economist at ING Financial Markets in Milan, highlighted the economics professor’s “constructive attitude” after he talked about the need to “minimise conflict and maximise the chances of a mutually beneficial agreement”.

“We believe that, if in power, Syriza could prove more pragmatic than many anticipated,” said Pizzoli.