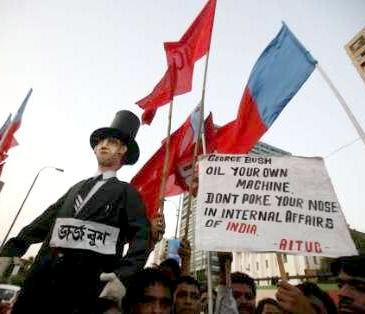 There are points when long-term trends emerge openly in the present, and a process normally visible only from a distance becomes an unmistakable part of daily life. The displacement (or better dispossession) of rural petty cultivators and producers became noticeable with the adoption of “Green Revolution” expensive technical farming in the 1960s and 1970s, and gathered speed from the time of the neoliberal “reform” regime adopted by the ruling class in 1991. Claims were often made that expanded production for export would create industrial jobs for the masses expelled from the countryside. Such claims were false. Instead vast slum belts surround the cities, and brazen claims of employment gains are falsified by the word “informal” and the misery it denotes. The anguish of this immiserated population echoes with every price rise of foodstuffs, while yet more cultivators are dispossessed.

Yet seventy percent of the population is even now rural, and under ever greater strains. Lakhs of farmer suicides have occurred in the last decade, and the causes are clear to every honest observer. Neoliberal “reforms” subjected farmers’ incomes to the wild swings of world speculative markets, and restricted state subsidised credit to a small minority of cultivators. Usury, suddenly celebrated for its “market” magic, finished the murderous job. Even the small minority worthy of credit from the organised banking sector face a full-scale crisis. Large parts of Punjab and Haryana, epicentre of “Green Revolution” farming with chemicals, high-yield seeds and irrigation, now face desertification in the next decades. A recent report by the Punjab State Council for Science and Technology asserts that the state’s agriculture “has become unsustainable and nonprofitable.” G.S. Kalkat, chairman of the Punjab State Farmers Commission, claims that if farmers in Punjab don’t change the way they grow food, a “Dust Bowl” will result.
Posted by nickglais at 11:30 AM