Ireland - This is Criticial Because This is Class War 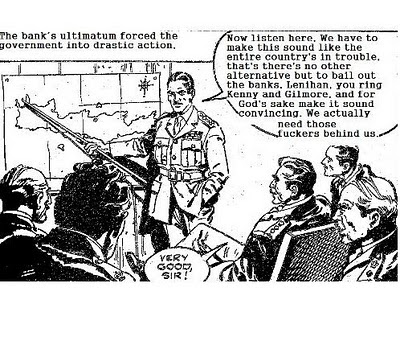 The proponents of capitalism never tired of telling us how it is not the state’s role to interfere in the ‘free market’ – that economic competition between private producers and investors is key to economic growth.

They never tired of telling us that incentives, in the form of profits, were essential to convincing ‘bold entrepreneurs’ to take investment ‘risks’. They never tired of telling us that this was the only way to successfully generate rising levels of economic growth and wealth that would, ultimately, it was argued, trickle down and benefit all of society. Nor did they ever tire of telling us that, if these investors happened to make bad investment decisions, then they alone would face the consequences; it was only fair that, in the same way as they were handsomely rewarded for the successful risks they were taking, so too should they suffer the losses when their investments failed. That is some of the logic of capitalism. So the theory went anyway.

On Tuesday [March 30], the Twenty Six County minister of finance Brian Lenihan exploded that particular set of myths with the announcement in Leinster House, that, far from the people being sovereign, they would, in effect, be paying the debts of private banks for decades to come. By his actions, Brian Lenihan has confirmed the contempt in which the political establishment holds the very people who elect them.

The detail of the further bail-out of the banking system is truly staggering in its scale: a total of €21 billion [£18.7 billion] to rescue a failed and corrupt system.

Of this total, €8.3 billion [£7.4 billion] will be pumped into Anglo-Irish Bank, for so long the play-thing of the Twenty-Six County state’s biggest property developers. It doesn’t end there either, as Lenihan announced that a further €10 billion [£8.9 billion] will be required for AIB alone. Prior to Tuesday’s announcement, AIB had already received €4 billion [£3.6 billion] of taxpayers’ money. To put this €21 billion in context, the combined health budget and education budget in the year that the bank guarantee scheme was agreed was €23 billion [£20.4 billion].

The consequences of this decision will be felt for a long, long time; the mass of people face unemployment, reduced public services and chronic levels of debt for generations to come.

The right of the people to quality healthcare, housing and education is being made subordinate to the interest of banks, speculators and developers. Workers pension rights are being sold off so that the fat-cats that bankrolled Fianna Fáil for decades can be saved.

On Tuesday, many of these property developers, almost all of whom regularly attended the Fianna Fáil fundraising tent at the Galway races during the so called boom years, had their loans transferred into NAMA. Among them were Liam Carroll, Bernard McNamara, Seán Mulryan and Johnny Ronan, the playboys of the Celtic Tiger, lauded by the corporate media as the men who were taking the big risks to build a thriving economy. These parasites, facilitated by their political wing in Fianna Fáíl, simply inflated the property bubble, forcing thousands of households to take out 100 per cent mortgages on homes that were incredibly over-valued. These householders are now expected to pick up the tab for this gambling greed.

The consequences of the bank guarantee scheme of September 2008; a scheme that Fianna Fáil, Fine Gael, the Green Party and Sinn Féin all supported, is now painfully evident. Secret meetings between senior bankers and Dublin government ministers thrashed out a deal that was foisted upon an unsuspecting public. The loans and deposits of all banks were guaranteed on that September night in 2008 with little detail provided as to the exact state of the banks’ loan books. Any semblance of democracy has been truly torn to shreds and all that is offered is the tired Thatcherite mantra, ‘There is no alternative’.

No alternative, it seems, to bailing out the rich and powerful in Irish society with billions of euro of taxpayers’ money, while workers who actually created the wealth are consigned to the dole queues. With high rates of unemployment, bosses are using the recession to try and force down the pay and working conditions of those still in work. The deal agreed between ICTU negotiators and the Dublin government this week represents yet another shameful sell-out of public sector workers. It is utterly astonishing that union bosses are agreeing to a four year pay freeze and cuts in overtime for public sector workers while tens of billions is being spent bailing out the banks. The privatisation of sections of the public sector will follow unless workers demand that enough is enough.

This system has never been so clearly exposed as the fetter on human development it is as it was after Lenihan’s announcement. War has been declared on workers who are being treated once again as mere cogs in a profit-producing machine. That these egregious amounts of bailout funds can be made available now to rescue the capitalist banking system gives the lie to the notion that there is not enough money in society to take care of the totality of the social needs of people.

It is a lie that this type of society serves the needs of anyone but a small minority. We, the working people, need to take as our starting point in our understanding of this the fact that it is the working class alone who are the creators of wealth and that it is only through exploitation that wealth passes out of their control into that of the capitalist. Most importantly, we need to understand that this bank bailout presents stark and condemning proof, if ever more proof were needed, of the fact that, in this type of society, there is an irresolvable conflict between the interests of the capitalist class and those of the working class.

The task for socialists and republicans now is to find ways of highlighting this reality to the working and unemployed people that are the victims of capitalism. For it is only through effectively agitating and organising among our people that we will have a fighting chance of ever building the forces required for this economic system to be pulled off its hinges and a new, socialist one, built in its stead.

This is a critical task because this is class war