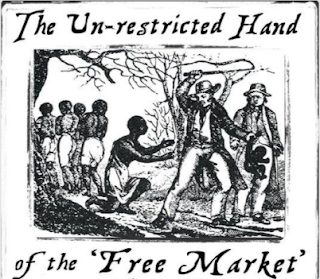 In 1944, Eric Williams wrote a book that was either quickly praised or quickly dismissed.  However, initial reaction underestimated the impact of the text.  50 years later, the assertions presented in Capitalism and Slavery are still debated by historians when discussing the impact of slavery on the Industrial Revolution.

In one of two main theses, “Capitalism and Slavery” asserted that triangular trade was instrumental in developing the capital used in launching Britain’s industrial revolution.  In 1975, Roger Anstey refuted that premise and, in fact, felt that the Williams text had been unequivocally disproved.  Yet in 1997, Robin Blackburn published a text supporting Williams.  The question of slavery’s impact on the industrial revolution is still at large and, in the words of one wise professor, “It won’t be solved with numbers.”  Nonetheless, it is worthwhile to examine some of the writings on the topic in an attempt to elucidate to the reader some of the main points of the debate.

Williams gave as his evidence connections between slave traders or West Indian sugar planters and three economic sectors crucial to the industrial revolution: banking, heavy industry, and insurance.  In Liverpool especially, slave traders founded major banks or those associated with the trade.  Men who had accumulated their capital in the African trade in 1753 founded Heywood Bank. The Leylands were another family of slave traders turned bankers.  The Barclays traded slaves in 1756 before establishing their bank, one of the largest in Britain today.  Banks were also established in Manchester and Glasgow, both closely connected with the cotton trade, and hence with slavery, and in Bristol and London, both competing with Liverpool before the 1770’s for control of the slave trade.

In heavy industry, some of the capital, which supported metallurgical industries, came directly from the triangular trade. The team of Boulton and Watt is a well-known example, receiving advances from Lowe, Vere, Williams, and Jennings.  These men had ships trading with the West Indies and used the profits to invest in the steam engine; their desire was to have it speed up sugar processing.
Triangular trade was also associated with insurance companies.   The famous Lloyds of London started as a coffee shop where escaped slaves could be returned and claimed; Lloyds also offered insurance against fires in the West Indies from the early days of insurance.

Williams’ style and loose connections have been widely condemned as anecdotal by economic historians. In 1972, Roger Anstey published a response to Capitalism and Slavery in his book, The Slave Trade and British Abolition. Anstey makes extensive use of economic calculations in order to prove his argument that the slave trade did not have a major impact on the industrial revolution. Anstey calculates that profits from the slave trade came to about nine percent of the amount invested.  In real money terms, this would be slightly over nine million pounds total profit in the second half of the 17th century.  The annual average came to about 200,000 pounds.  By 1800, the national ratio of investment to national income was about seven percent; national income was about 180 million pounds, so national investment was 12.6 million pounds per year.  If slave-trading profits followed other investment tendencies, meaning seven percent was invested, the slave trade profits that were invested totaled 14,000 pounds per year, which is 0.11% of the total national investment.  In the unlikely situation that all slave trade profits were invested, they would account for 1.59% of total national investment.

Williams’ thesis did not rest solely on the contribution of slave trade capital. Other major contributors of the triangular trade (now broadened and more often known as the Atlantic System) were the sugar colonies of the West Indies.  According to Williams, mercantilism stimulated industrial development. Drescher, in his reassessment of Capitalism and Slavery, does not agree with the slave trade’s premier importance in accumulating industrial capital.  He does however state that among historians there is a “broadening consensus on slavery’s decisive role in the creation of the Atlantic economic system.”  Without slavery, there would have been few to no sugar plantations.  These plantations were a vital part of Britain’s industrialization by providing an outlet for manufactured goods, as there was little to no manufacturing on the islands.

In The Problem of Slavery in the Age of Revolution Davis writes that 60-70 percent of all slaves who survived the middle passage toiled in the sugar plantations of the West Indies.   These societies had very unbalanced economies, with few people interested in the islands’ long-term welfare. West India had extremely high absentee rates, and most white men who lived there did so with a hope to leave rich after 20 years. There was no real development of resources other than sugar, tobacco, and indigo because the residents were not trying to create a society; they were merely trying to make money.  By the turn of the 19th century, the West Indies were a sinking ship; a Parliamentary protection hid the problems of increasing costs, over-investment in slaves, and high debt.  According to Davis, this society was supported by and supported the Industrial Revolution.

Joseph Inikori in “Slavery and the Development of Industrial Capitalism in England,” argued that from the mid-fourteenth through the mid-fifteenth centuries, population growth was rapid enough that Britain could move towards a capitalist economy: not all workers were needed to grow food to sustain the population. By 1650, the still-rapid population growth demanded employment outside of agriculture.  The growth of overseas trade provided that employment. Exports soon became the largest contributors to the move towards a capitalist England.  Inikori gives as an example the change in manufactured exports from 1700 to 1811. In 1700 manufacturing, mining, and building made 18.5 million pounds, of which 3.8 million were exports and 14.7 million were consumed at home. In 1811, the same three industries made 62.5 million pounds, of which 28.2 million were exports and 34.3 million were for home consumption.  This means that the percentage of mining, manufactured, and building products that was exported rose from 20 percent to 45 percent in the course of the 18th century.  These exports largely went to the West Indian colonies.  Without such a high rate of exports, industrialization would have been considerably slower.

Recent studies have begun to look at the Atlantic system as a whole, and how it contributed to the rise of industrialization in Britain.  To those unfamiliar, the Atlantic system is the integration of the African and Atlantic slave trades, all Atlantic colonies (including British, Dutch, Portuguese, and Spanish colonies), and Europe, remembering that capital traveled freely through trade among all parts of the system.  Williams alluded to this when he spoke of “triangular trade.”  Recent scholars have elaborated on the concept of triangular trade; hence the new name, the Atlantic System.

Using new numbers computed by Thomas and Ward, along with Anstey’s percentages, Robin Blackburn has recently re-computed the likely contribution of Atlantic system capital to the Industrial Revolution. He calculates the figures for basic profits from the Atlantic system in 1770 as follows (in pounds):

Blackburn calculates that the total profits earned from the Atlantic system are almost three million pounds.  His upper estimate is 4,336,000 pounds.  Blackburn goes on to say that there is reason to believe that re-investment of these profits was quite high, between 30 and 50 percent.  This means that Atlantic System profits could account for one-half to four-fifths of the gross fixed capital needed to finance a major industrial undertaking.  One major undertaking in this time was canal building; merchants and bankers and manufacturers contributed 36 percent of the finances used to build canals in 18th century.  Those are the very people involved in trade within the Atlantic. Even following Anstey’s figures, Blackburn has shown that the Atlantic system did have a likely impact on financing the industrial revolution.  It is not as high as Williams claimed, nor was it as low as Anstey rebutted.

Blackburn used the framework of primitive accumulation to prove the import of the Atlantic system to the Industrial Revolution.  According to Marx, capitalism first required a phase of “primitive accumulation,” a period in which people acquired capital, which they were then able to invest.  Adam Smith called this phase “previous accumulation.”  Blackburn believes the West Indies provided a state of “extended primitive accumulation,” meaning the West Indies offered an opportunity to constantly acquire capital to invest.  This allowed Britain to produce more than its mainland population and agricultural capabilities would allow. Blackburn cites Davis’ figures on exports by location, finding that exports to the Atlantic colonies were 43 percent from 1784-86 and 57 percent from 1806-08. To further his argument, he cites Crafts’ newest numbers, which show that the rise of exports contributed 56.3 percent of the total rise in industrial output from 1700-60, and 46.2 percent from 1780-1800.  This offers convincing evidence of the importance of the Atlantic system in promoting the Industrial Revolution.

Hobsbawm extends the import of trade to include Asian trade.  His “dependent” economies consist of formal colonies -- such as the West Indies, points of trade that were dominated by Western Europe -- such as China or Japan, and advancing economies -- such as Eastern Europe.  Hobsbawm goes beyond the Atlantic system, but still includes it in his research.  According to Hobsbawm, these dependent economies offered the “spark” needed to ignite the Industrial Revolution.  He offers figures for the increase in output for home and export industries.  While home industries increased by seven percent between 1700-1750 and eight percent between 1750-1770, export industries increased by 77 and 80 percent in those time periods respectively. According to Hobsbawn, export industries were able to surge ahead of domestic industries because of their tendencies to capture foreign markets and destroy foreign competition.  Therefore, these numbers are not completely accurate, as some of them include goods manufactured in other countries that have been taken over.

In his recent book, Pomerantz supports the conclusion that colonies were a vital ingredient in the Industrial Revolution.  He compares European economies to those of China and Japan. In the mid-18th century, the economies were very similar. Europe was able to surge ahead industrially not through internal advantages but through external ones. According to Pomerantz, these were the extra markets and “ghost acreage” provided by Atlantic colonies.

Prior to and since the publication of Capitalism and Slavery, historians have given many arguments for the uniqueness of Britain’s Industrial Revolution.  Many of these are linked to the sometimes-called Agricultural Revolution, which started earlier and exponentially increased, the food available in Britain at a lower labor cost.  Others feel it was the abundance of coal that gave Britain’s its edge.  Still others would look to the growth of home markets to explain.  It is impractical to ignore this matter of slavery; British colonies were an obvious source of wealth at this time, and slaves made the wealth in many of those colonies.  We may never have the exact figures, nor may we see the intricate linkages, but it is obvious that, without slavery, the Industrial Revolution would not have been the British advantage it was.

Posted by nickglais at 2:45 PM