Science and Technology in North Korea Part 1 : By Kim Soobok (Translation and edits by Hyun Lee) 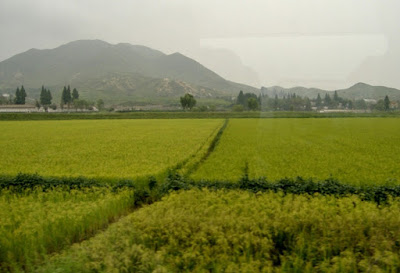 Political Economy Research will be publishing series of articles shining the light on North Korean achievements in the last 20 years following the devastation suffered in the 1990's and how they have applied science to solve their problems.

By Kim Soobok (Translation and edits by Hyun Lee)


After the collapse of the Soviet Union and the Eastern Bloc in the 1990’s, North Korea lost eighty percent of its trade and saw a drastic decline in its ability to import oil. Imagine trying to maintain a living after a sudden drop in your own income by eighty percent. It’s an imperfect analogy, but it might give us an idea of the direness of the country’s situation back then.

In July, 1994, in the midst of this crisis, Kim Il-sung, the supreme leader of the North Korean people since the days of the anti-Japanese armed struggle, suddenly passed away. On top of it all, a series of major floods devastated the country on an unprecedented scale in the summers of 1995 and 1997.

Eighty percent of North Korea is mountains, and the extraction of underground coal and minerals is North Korea’s industrial artery. It needed to quickly pump out water to restore its thousands of underground mines devastated by the floods, but the country’s energy crisis was already at its worst and there was no electricity to operate the pumps.

The coal-based synthetic fiber vinalon was the base material for most of North Korea’s clothing, but without coal, the country could no longer produce textile. With iron ore also underwater, steel production came to a standstill. But the most difficult was the inability to farm to feed the people.

Without fuel, the country couldn’t pump water to irrigate the rice fields. And the decline in oil imports meant North Korea could no longer produce fertilizer based on naphta, a byproduct of oil refinery. This devastated North Korean agriculture and froze its grain production, and marked the beginning of the period known as the “Arduous March.” It took North Korea many years to restore its coal mines and normalize production.

Readers in the United States may remember Hurricane Sandy, which swept through parts of New Jersey and New York in October 2012. It fell tree branches that had already been weighed down by an early snowfall. One branch cut through a power line as it fell and caused an explosion at a substation, which led to a region-wide blackout that lasted for days. My house had no electricity for eleven days. We couldn’t cook and had no heat, so everyone in my family became sick. We lit candles and spent our evenings shivering under the covers.

Gas stations had no electricity to operate their pumps. The few that had generators to remain open had endless lines of people.

This happened in the United States, which considers itself the most advanced nation, due to a felled tree branch after a few days of heavy winds. Imagine the damage suffered by the North Koreans when the entire country was submerged under water. With no food nor heat in a country where the winters are long and bitter, what did the North Korean people experience?

Meanwhile, South Korea flaunted its status as among the world’s top ten wealthiest countries, and its people frivoled away disposable income on overseas vacations. South Korea’s nouveau-riche reveled in idle leisure at golf courses and bars in the Korean autonomous region of Yanbian in China. The then-Kim Young-sam administration in the south put all means of pressure on Japan to abandon its pledge to send 50,000 tons of rice as humanitarian aid to the north. The United States and South Korea prepared for North Korea’s collapse through its numerous joint military exercises, and South Korean intelligence encouraged the media to circulate the prediction that North Korea would collapse within three weeks or three months, at most three years.

North Koreans don’t talk much about their hardship during the Arduous March. What they went through is unimaginable to the rest of the world, but they have great pride in the fact that they survived the brink of collapse and achieved what they consider a phoenix-like resurrection through sheer grit and adherence to their national philosophy of self-reliance. They have great faith in their leadership and look to the victory of their previous generation’s armed struggle against colonial Japan as inspiration for their current struggle.

After sixteen long years of hardship, North Korea finally began to normalize production in all national industries in 2008-2009. It declared 2012, which marked the centennial of Kim Il-sung’s birth, the year of “opening the door toward becoming a strong and prosperous nation.”

North Korea’s seemingly miraculous recovery from the brink of collapse was the result of key policy decisions made by then-North Korean leader Kim Jong-il, who, amidst his own battle with cancer, steered the country to focus on developing science and technology to rebuild its industries based on the philosophy of self-reliance. Even at the height of its economic crisis, North Korea, thinking ahead, decided to tighten its belt and allocate its limited resources to developing technology rather than short-term food purchases. At an onsite inspection of an underground automatic lathe factory in 1995, Kim envisioned not just restoring the country’s ailing factories but redesigning and equipping them with cutting-edge technology.

Self-reliance and the Importance of Science and Technology
The principle of self-reliance–that one can and should solve one’s problems utilizing one’s own resources and skills and not become dependent on foreign powers–was the guiding philosophy of North Korea’s  founding leader Kim Il-sung since the Korean people’s anti-colonial struggle against the Japanese. And it has been the country’s guiding philosophy ever since. North Korea’s experience during the Korean War–when countries that had pledged support didn’t come through with supplies of armaments in its moment of desperate need–reaffirmed its belief that to guarantee its survival, it cannot rely on others and needs to develop its own resources.

Kim Jong-un, following the steps of his father and grandfather, places the highest priority on the development of science and technology as the engine behind the construction of a “strong socialist nation” and regards the scientist’s blueprint as the key to improving the economic livelihood of the people. In 2013, the central committee of North Korea’s Workers Party announced an outline of its plans for “science and technology development in the Kim Jong-un era” and its “Byungjin line,” i.e. the simultaneous development of its nuclear deterrent and economy. It outlined the following top priorities the country should solve through science and technology:

North Korea’s stated aim is to become a society where people no longer sweat and toil to eek out the bare minimum but live comfortably through the fruits of scientific and technological advances. Kim Jong-un, in keeping with his father’s motto, “Plant your feet on your land and keep your eyes on the world,” instructed party members to upgrade the nation’s science and technology to a “globally-competitive level” and acquire cutting-edge know-how in high-tech industries, such as information, nanotechnology and bio-engineering.

Scientists in North Korea are highly valued for their service to the country and receive preferential treatment. Under Kim Jong-un’s leadership, North Korea has built brand new residential complexes for the teaching staff of Kim Il-sung University and the Kim Chaek Institute of Technology and has dedicated whole streets with apartment complexes for scientists involved in the Unha Rocket and satellite launch programs. The country has also built a resort area solely reserved for scientists at Lake Yeonpung near the city of Gaechon.

In the next three parts, I will discuss the role of science in increasing grain production in North Korea. Key requisites for grain production are fertilizer, water, seed and land. Actually, the person who tills the land is the most important, but that’s for another discussion. Part two focuses on North Korea’s two-decade struggle to get water to the fields, and part three on advances in fertilizer production. Seed and land are subjects for further research should I have the opportunity to travel to North Korea again in the future.