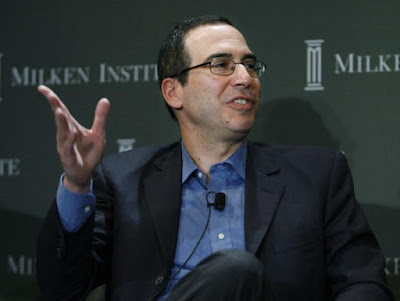 Fox Business Network, citing unnamed sources from inside the Trump campaign, said the New York businessman has told his team he wants Mnuchin to lead the U.S. Treasury Department if he wins the Nov. 8 election.

Representatives for the Trump campaign did not immediately respond to a request for comment.

Trump largely funded his own campaign during the primary contest for Republican presidential nomination but moved to join with the Republican National Committee to jointly fundraise his general election campaign against Democrat Hillary Clinton. He has still contributed millions of his own funds.

Trump has faced a significant fundraising deficit compared with his Democratic rival Hillary Clinton. Trump raised a total of $255 million, including about $56 million of his own money, compared to Clinton’s $513 million for the entire election cycle through Oct. 19.

Last week, Trump pledge to donate an additional $10 million of his own personal funds.

Over the years, Mnuchin has donated thousands to Republicans as well as Democrats, according to federal campaign finance records, including to Clinton’s 2008 presidential campaign and her earlier Senate races.

Mnuchin, a graduate of Yale University who serves on several boards, resigned last year from the board of CIT Group Inc.