Niall Ferguson and Empire for Kids - 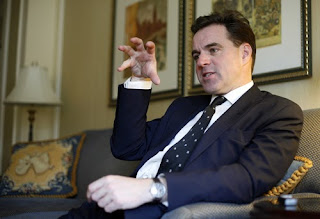 The Tories want our children to be proud of Britain's Imperialist past (and present ). When the right-wing colonial historian Niall Ferguson told the Hay Festival  that he would like to revise the school history curriculum to include "the rise of western domination of the world" as the "big story" of the past 500 years, the Education Secretary, Michael Gove, leapt to his feet to praise Ferguson's "exciting" ideas.
Our suggestion is the following  Empire for Adults  is LATE VICTORIAN HOLOCAUSTS by MIKE DAVIS which will not get approval by Niall Ferguson or Michael Gove with their propagandist Empire for Kids:
http://democracyandclassstruggle.blogspot.com/2010/04/late-victorian-holocausts-by-mike-davis.html


The following videos gives an insight into right wing thinking of Fiscal Consolidation and the alternatives has the metropolitan elites see them.
Posted by nickglais at 6:58 AM